Following on from my first installment about Velazquez’s masterpiece, Las Meninas, I’m now turning to a work of art that was created in the Tudor period of English history; Holbein’s enigmatic and resplendent, The French Ambassadors. I’ve always been fascinated by this painting. It’s currently on display at the National Gallery in London.

This full-length double portrait with still-life objects depicts the French Amabssadors: Jean de Dinteville, the ambassador to England on the left (who commissioned the painting) and on the right is Georges de Selve, the Bishop of Lavaur, ambassador to the Papal court. Both men served King Francis I of France.

You can tell by their posture, expressions and equal presence in the painting that they are good friends. Holbein seems to have captured beautifully the subtle nuance of their relationship and shared interests.

What also stands out for me looking at their stance, is how self-assured they appear, both personally and in regards to their faith, which would have been dangerously at odds with the religious turmoil in England at that time.

The painting has long been the focus of analysis and discussion, due to the many encoded clues contained within its colourful pigments. These hidden meanings spring from the Italian tradition, and because the work is full of symbolism it can be interpreted in a number of ways…

As I’ve said before, I’m no expert on art and art history, but it is a subject that interests me and I’m learning as I go!

As a lay person I can appreciate the incredible detail and vibrancy of the green jacquard curtain behind the men, the way the light catches on the satin and the fullness of the folds. On the far left upper corner of the picture you can see a dark shadow where you can just about make out a silver crucifix hanging, partially hidden behind the sumptuous material.

It highlights that both the painting’s subjects are staunchly Roman Catholic. You could also surmise that they believed Christ is always there even if you can’t see him.

Research has recently indicated that a chapel was located directly behind the wall on which the painting was once hung.

The anamorphic skull between them would have served as a reminder of the transient nature of human life to courtiers and holy men as they passed by the painting on their way to the chapel. Art scholars have deduced that the painting was originally hung in a narrow corridor due to the acute slant of the skull.

It was a measure of Holbein’s skill that he could distort the image so cleverly that it appears to be corrected when viewed from a steep angle to the side of the image. It serves as a memento mori that death eventually comes to all, no matter their station in life.

The portrait is very telling of the political and religious upheaval that was underway in England in 1533. Henry VIII was deeply involved in his ‘great matter’, namely how he could annul his lengthy marriage to Catherine of Aragon, marry Ann Boleyn and break away from the Pope in Rome.

The beautiful floor tiles are even significant, being the same as the ones in Westminster Abbey choir, where Henry VIII married Anne Boleyn. Thus Holbein was doffing his painterly cap in a political and personal gesture to his future patron and monarch.

The ambassadors are standing either side of an étagère, a double level storage unit that has an oriental carpet draped over the top. Both are resting an arm on the upper level which contains items concordant with the ‘celestial’ sphere. The objects imply erudition in science, showing perfectly detailed instruments that measure time and the heavens.

We immediately feel that they are educated, learned men, concerned with the larger questions of existence and the universe. Their expressions convey a sort of intellectual intimacy.

The lower shelf portrays the ‘terrestrial’ sphere, with a hymnal open to Luther’s hymn ‘Come Holy Spirit our Souls Inspire’ and the lute, which has a broken string, could indicate that harmony has been broken by religious discord.

A brilliant analysis of The French Ambassadors by the National Gallery in London:

Born in Augsburg to a painter father (Hans Holbein the Elder) and younger brother to Ambrose Holbein, he is considered one of the greatest German painters of his time, alongside fellow Northern Renaissance masters, Albrecht Dürer and Matthias Grünewald. 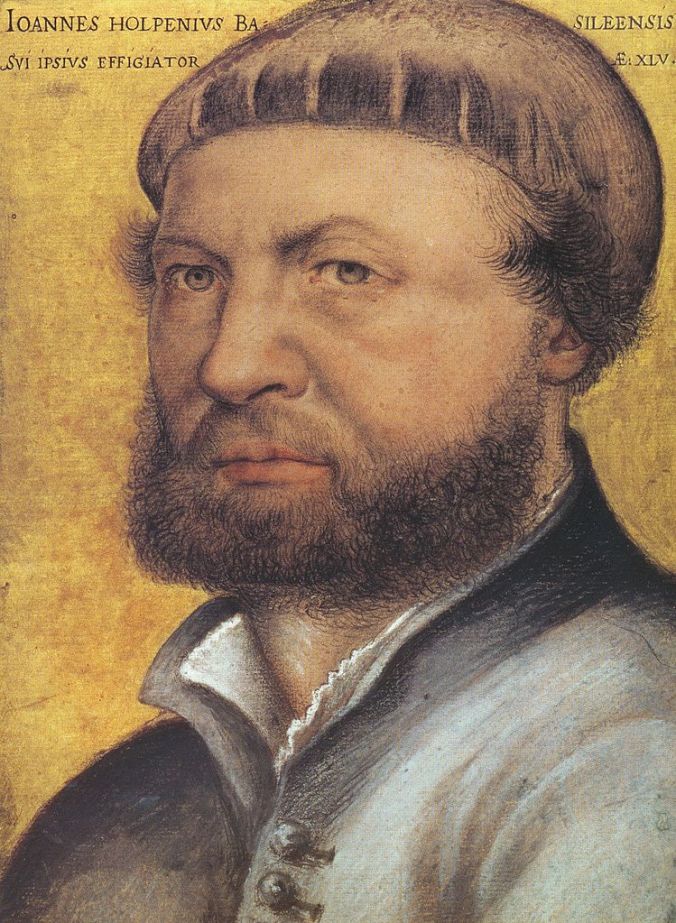 While his father produced mainly religious paintings, Hans Holbein the Younger was able to branch out into woodcuts and portraiture. He was obviously filled with wanderlust, and lived and worked in Basel from 1515 to 1526, when he took a two year trip to England.

Holbein returned to Basel a fashionably dressed, wealthy man and bought a house. Basel was a flourishing intellectual city at the time, where the influential humanist scholar, Erasmus of Rotterdam, lived and worked. Such was his legacy that he reconciled classical antiquity with Christianity and was named ‘the first conscious European’ by Stefan Zweig.

Holbein painted Desiderius Erasmus a number of times, who furnished him with a letter of recommendation to the lawyer and author of Utopia, Sir Thomas More in London.

The iconoclasm of 1529 meant that religious paintings were banned in many parts so portraits became the main source of income for artists.

Holbein travelled to London again in 1532 where he was bestowed with many private commissions, one of which was by the now immortalised Jean de Dinteville. He also received commissions from Thomas Cromwell and the powerful Boleyn family.

He was appointed as a court painter and portrait artist to Henry VIII in 1536. His annual income was around thirty pounds; less than the miniaturist painters at court received. However, it’s Holbein’s work that has endured from this period! 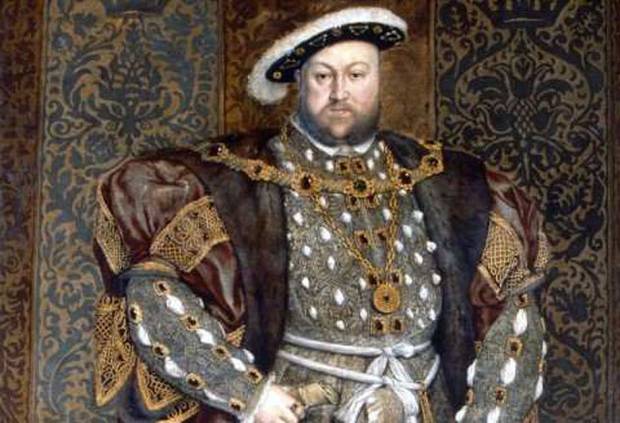 In recent years I enjoyed watching the hit TV series The Tudors, and here is a great scene where Thomas Cromwell commissions Master Holbein to paint a portrait of Anne of Cleves (with the agenda of arranging a politically advantageous union between her and Henry), and tells him to make sure that he portrays her with a “pleasing countenance”.

Holbein’s supposedly complimentary 1539 portrait of Anne of Cleaves persuaded Henry to marry her, but unfortunately, when Henry decided that his bride’s actual appearance did not live up to that of her painting, Master Holbein fell from favour and did not receive any further royal commissions.

Hans Holbein the Younger died at the age of forty five, falling victim to the dreaded plague which was rampant in London in 1543.

Holbein is probably one of the best portrait artists of all-time, leaving a large number of eloquent and life like portraits of his contemporaries to posterity.

With regards to The French Ambassadors it’s not just the skill with which he has incorporated the hidden meanings, but also the sheer brilliance and appearance of the realistic figures, the fine details of the still life component and the texture of their clothes. I want to run my hand over their furs and silks…

However you interpret the painting, one thing’s for sure: it’s an amazing piece of art that is clever, beautiful, contemporary and full of technical mastery which is still relevant today.