My youngest son, William Chapman, who is now 12, has been attending the Jackie Palmer Stage School in High Wycombe since he was about 4 years old. He has learnt a great deal in his time there, and whilst he doesn’t enjoy singing and dancing so much now he’s a teenager, he is passionate about acting and drama. 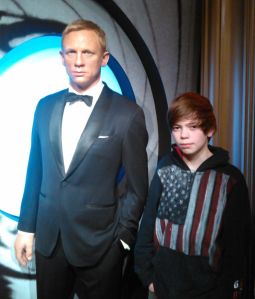 At Madame Tussauds with Daniel Craig, aka James Bond.

Over the years he has attended many auditions, and I have a few stories to tell there…

The most notable one was when he went for the part of Alfie in ‘May Contain Nuts’ the ITV two part drama adaptation of John O’Farrell’s satirical book. I remember Emily was only about four months old at the time, and because it was in West London I drove rather than taking the mainline train to Marylebone (which is what we always do for central London locations). This was a mistake. I was running late, (as usual), and I couldn’t find anywhere to park. I was worried that Will might miss his slot so I parked on double yellow lines, thinking we’d only be a few minutes.

Mostly, it’s a whole lot of travelling for ten minutes in with the casting director – if you are lucky; but this day it was a bit more involved so we were there longer than usual. I was mainly concerned with making sure my infant daughter didn’t bawl the place out!

William was only about 5 then, and unburdened by the nerves he can sometimes suffer from these days. He seemed to relax and thoroughly enjoy himself. We left and went back into the road, and walked to where I parked the car; only there was no car. With my car gone, and the kids in tears, I ran back into the casting agency and became somewhat hysterical. They were brilliant; they called Westminster Council and established where my car had been taken, then called me a taxi to get there. I had to walk along the most massive underground car park in Mayfair carrying a baby in a car seat with a 5 and 9 year old wailing and moaning beside me. I duly paid the £250 to get my car back and drove home. As you can image the air was somewhat blue inside my mind!

There is a happy ending though, despite my drama they cast Wills as Alfie, it was his first TV drama role. http://www.comedy.co.uk/guide/tv/may_contain_nuts/

When I look at him sitting in the car seat he looks so young and blond! Here he is in part 1 with his pretend family:  mum Shirley Henderson, dad, Darren Boyd, and siblings Bebe Cave and Andrew Byrne:

I also remember another more recent occasion when I took Will, Max and Ruby (who was also only a few months old at the time), up to central London for an audition. We visited Hamleys on our way back but while we were inside the store it began to snow. Heavily. When we struggled through the throngs of Christmas shoppers and emerged onto Regent Street we were faced with blizzard conditions and rush hour. By the time our train pulled into High Wycombe station the whole country had virtually ground to a halt under the white onslaught, and nobody could get their cars out of the station car park. I had visions of us sleeping over night in a freezing car, or making a kind of arctic expedition on foot, which I didn’t relish with a cold and hungry baby. I think it was about midnight by the time we eventually got home with a little help from our family.

Being a proud mum I couldn’t resist showing off his efforts as the young Edward Jenner for BBC Learning: http://www.bbc.co.uk/learningzone/clips/true-stories-edward-jenner/13410.html

I finally persuaded him to write a brief account of his recent filming as an ‘extra’ (tribal kid), on the Warner Bros. summer blockbuster for 2015, Pan. 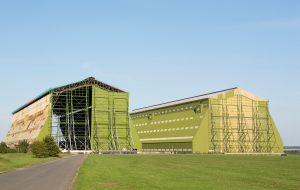 Working as an extra in Pan is amazing; it’s such an awesome experience! But it’s hard work though, ten hour days plus one hour journeys each way to the studios. It was very tiring. I normally had a 6.45am start at the rendezvous, where we travelled by minibus to Cardington Studios in Bedfordshire.

Luckily we always had a warm welcome and a warm breakfast to wake us up. Costume fitting and makeup took about an hour, but it was good to admire all the costumes. 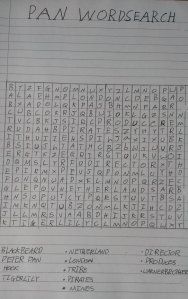 Arrgghh! Tutoring! This was next in my day. Tutoring could be fun though, and so it was a lot more enjoyable than school. One time we did a huge planned court case which was really interesting. Sometimes we didn’t go on set but on this day we did.

Once on set we were sheltering from the pirates under the ship’s floorboards and we had to be terrified! Our chief gets shot by Blackbeard (Hugh Jackman), so remember to look out for that scene if you watch the movie.

After lunch we just did more tutoring then we went back on set for a retake of the earlier scene, but we were lucky enough to meet and say hi to Hugh Jackman! We gave him a high five, awesome right?

Well, that’s my day as an extra.

It was great to collect him at the end of a busy day, and hear him enthuse about a multitude of impressions such as: exploding mud, the energy of being on set, watching the actors practising their sword fighting skills, the delicious meals they had for lunch, meeting other young actors from a few other stage schools, including Levi Miller who plays Peter Pan.

It has been a wonderful experience for him.  For most of June and some of July he was filming (about 15 days), so I’m hoping it won’t be a case of blink and you’ll miss him when I get to see it! It’s due for release on 26th June 2015, I can’t wait…