“The passions, whether violent or not, should never be so expressed as to reach the point of causing disgust; and music, even in situations of the greatest horror, should never be painful to the ear but should flatter and charm it, and thereby always remain music.” ~ Wolfgang Amadeus Mozart from The Journal of Eugene Delacroix. 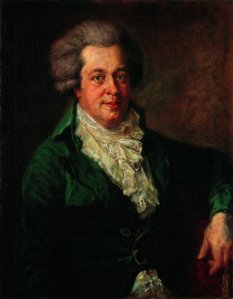 The name ‘Mozart’ conjures up an image of a divine genius, a demigod of music, unsurpassed child prodigy, composing savant with steam coming off his quill, operatic icon, inquisitive about the world and the mysteries of life, with an unquenchable thirst for knowledge and creative output. Not to mention an ardent admirer of women (especially ones who could sing), and who possessed a desire for fun and the simple pleasures of drinking and social discourse. An individual who was little in stature but large in intellect, who loved life and seemed to live it Allegro Con Brio.

At least, it does for me…

His fame has spanned centuries and his name is known by just about every human being on the planet. Whatever your impressions of this giant of classical music are, one thing’s for sure; his miraculous outweighed his mundane. By the time of his death in 1791 at the age of 35, he had written over a staggering six hundred compositions, in the form of sonatas, symphonies, concertos, chamber pieces, operas and choral music.

Revered by composers that followed, and most likely envied by his contemporaries (cue Salieri), Johannes Chrysostomus Wolfgangus Theophilus Mozart has probably touched more souls than any other composer in the history of music. And I think he was able to do that because of the mundane.

His mind was in another sphere, but his physical body was ordinary, and shared the same mundane functions as the rest of us mortals.  He experienced the everyday emotions of life that we all do: happiness, sadness, love, hate, desire, jealousy, pride, excitement, ambition, despair, longing, and well, the list goes on.

Because the miraculous isn’t possible without the mundane…

Therein lay the very substance for transmutation into the sublime, his inspiration of what it means to be human in musical form: collections of notes and pitches, silence and resonance, arranged for different instruments in different styles, something for everyone, and that anyone can relate to today, 224 years after his death.

His star shone bright (I’m talking supernova), and burned rapidly, but luckily for us Mozart was a prodigious and prolific composer, and despite his often challenging circumstances he created a stunning legacy of music for the world to enjoy.

His father Leopold would have been proud. His early tuition for Wolferl and Nannerl on the violin, clavichord and in classical composition (Mozart wrote his first sonata at the age of 5), along with their childhood travels across Europe, their family performances in front of royalty and the aristocracy, would eventually pay dividends far beyond his fatherly comprehension! Now his music is in space, courtesy of NASA.

He even has his own scientific phenomena: The Mozart Effect.  Play Mozart to your children, and even better, if they can learn to play him.

A list of Mozart’s musical compositions; which were numbered and classified in chronological order by Ludwig von Köchel as either ‘K’ or ‘KV’ in the Köchel catalogue.

There’s a lot of information and myth about Mozart, and I could go on all day, but instead, I recommend watching the fascinating and fabulous BBC documentary: The Genius of Mozart.

If you are on Twitter and you enjoy Mozart’s music why not join the celebration of his birth in the 6th annual #MozartChat on Tuesday 27th January, conceived and run by pianist and writer @waynemcevilly. Check out his website and piano masterworks for children.

You’ll be most welcome!