Until my younger son recently developed OCD (Obsessive Compulsive Disorder), I hadn’t realised just how prevalent it seems to be. I discovered some very well-known people (past and present) suffered with it, including one of my all-time heroes.

William was always prone to worry, and had certain proclivities towards cleanliness that his older brother didn’t! But the onset of adolescence seemed to take it to a whole new level.

I think there were several factors responsible for his increased ‘sensitivity’, and an overall increase in anxiety was definitely one of them.  He continues to work hard at school, and so far his grades are up at grammar school level, but he worries about his homework and his work in general.

On a personal level he seemed suddenly unsure of himself. Growing up he’s mostly been a confident and self-assured boy, but lately he started asking me if I still loved him. He seemed to need extra reassurance. I was happy to give him this, but it didn’t appear to quell his anxiety.

William was just the sweetest, kindest, affectionate and most lovable boy until his hormones kicked-in. Now I have to endure a know-it-all attitude, frequent rants, his being argumentative and confrontational with me and his siblings, mood swings, and on top of his typical teenage behaviour there is a debilitating voice in his head – his OCD; which undoubtedly adds extra strain to family life.

His appetite seemed to diminish, foods he liked previously were assigned to the ‘rank list’, and suddenly he started going a whole day at school not eating any of the restaurant food available. He couldn’t sit down without first putting an item of clothing on any seat and he had to have two showers a day. His hand washing became so bad his skin got really sore and cracked, and he developed an aversion to pretty much every smell in the universe! At one point he would only eat crisps with a fork!

After a visit to his GP (who made a referral), and a lengthy wait, he was admitted to CAMHS (Child and Adolescent Mental Health Services), part of the NHS that deals specifically with this age group, to have some CBT (Cognitive Behavioural Therapy). Looking round the waiting room at the tired and apprehensive faces of the other parents I took comfort from knowing that I wasn’t the only one with teenage offspring going through some kind of melt-down.

CAMHS has been a Godsend for us, and I feel that William has made some good progress. Whilst there is still work to do, his therapist, Sue, has really helped him to understand that he has the power to kick OCD’s butt.

On his first session they talked about the relationship between his thoughts and behaviour. He was asked to focus in on the different emotions and sensations that he experienced, and he wrote them in a pie chart relative to what he was feeling. Sue then drew a couple of quirky pictures to illustrate to William how his thoughts created his feelings, and how they, in turn contributed to different sensations in his body, which then had a direct impact on his behaviour.

She drew him an ABC of thoughts:  Activity – Belief – Consequence

She asked him to consider:

“How helpful is my thought?”

“What evidence do I have to support my thought?”

“What evidence do I have to disprove my thought?”

“What would be a more helpful thought?”

“What’s good about this thought?”

“What’s bad about this thought?”

She then mapped his reactions to OCD to illustrate how the OCD wins, how he wins, and what happens at the intersection between the two. 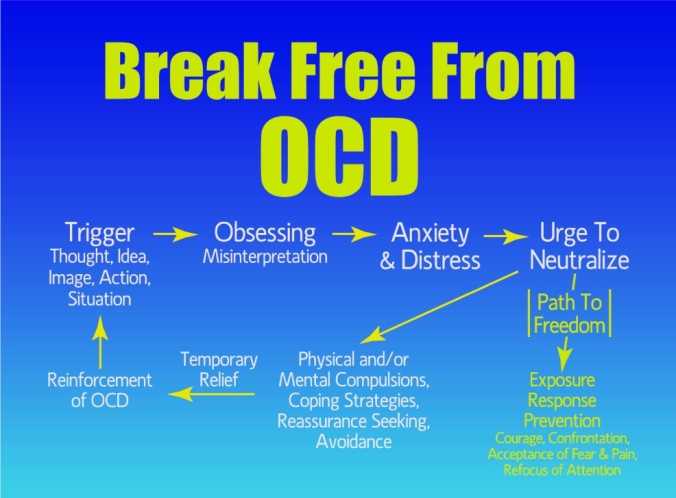 In later sessions he worked through an ERP programme (Exposure and Response Prevention), which is laid out according to the individual’s specific circumstances, where the activities and situations that cause the compulsions are deliberately undertaken.

At first, William was asked to participate in the actions that caused him the least amount of stress so that he could expose himself to the anxiety for short periods of time, gradually increasing the time and severity level of his activities. Sue drew a graph, and explained that his stress would always be high if he let his OCD rule him, and that to sit with the discomfort for a while would gradually lessen his overall anxiety around those activities, providing he made the effort to do the tasks that upset him.

“Exposure and Response Prevention (E&RP) encourages participants to expose themselves to their obsessions (or to situations that will bring on the obsessions), while they prevent themselves from using compulsions to get rid of the resulting anxiety.” ~ Fred Penzel Ph. D.

Over the weeks that followed Will worked on the strategies that were set specifically for him, and he began to see success. He gained confidence from the lesser tasks, so that he is now tackling the situations that he thought he never would be able to deal with.

My eldest son, Max (now 17 and towering over me), still has a few issues to deal with, but I feel we navigated his teen years through some scary storms into relatively calm waters. We have the odd squall, but on the whole he’s much happier. He also had a period of visiting CAMHS for different reasons, and they were instrumental in diagnosing his high functioning Autism. It also helped me enormously; mainly how to be a better parent to him, and I learnt not to take it personally when his lack of compassion or ‘mind blindness’ affected either me or the family.

I was dismayed to read in The Times last week that more cuts have been made to services directly affecting teenage mental health.

Modern society seems to be taking its toll on our youngsters, with increasing cases of depression, self-harm, eating disorders, mental disorders and in some cases suicide.  Government cuts to CAMHS are indefensible. Our youngsters need this service! The implications for society are dire if this vital service is diminished.

I am bracing myself for the next teenage era with my daughters, but thankfully I have a few years yet before I have to deal with that dreaded phase. My challenge before then will be to help shore up their self-esteem, confidence and our relationships so that even rough seas won’t be able to destroy the safe harbour we have built, or, at least that’s the idea…

I watched the ‘Kevin’ sketches again recently to have a laugh and reassure myself that we’d all get through it, even if I did have a few more grey hairs to show for it!

“When you change the way you look at things, the things you look at change.” ~ Dr. Wayne Dyer