“The piece is a monster. I have never seen anything like it; it may not be music at all.” ~ Wenzel Sukowaty (from the BBC film Eroica).

In honour of Ludwig van Beethoven’s 244th birthday on 17th December 2014, and the composer chat conducted by my esteemed musicians and friends on Twitter (hashtag #LvBchat), I thought I would focus on his most heroic of compositions – the Sinfonia Eroica. It was composed during the summer of 1803 and completed in April 1804.

The 9th of June 1804 was a very important day for our dear Ludwig, but it was also a watershed in the history of classical music, absolutely critical to the future development and evolution of music and for composers and artists in general. Beethoven set the benchmark. However, I doubt that Beethoven realised the profound significance of what he had achieved, he was just doing what he did best – following his heart and his muse.

This was the day that his legendary third symphony in E-Flat Major, opus 55 was first privately performed at the Bohemian residence (Castle Eisenberg), of Prince Franz Lobkowitz, to whom the work was dedicated, and one of Beethoven’s most ardent supporters and patrons. Rehearsals prior to the public premier of the symphony (which took place on 7th April 1805 at the Theater an der Wien), were held in the concert hall of the prince’s Palais Lobkowitz in Vienna, (later named the Eroica Saal after this momentous composition), and was to unleash music of the likes the Viennese had never heard before. Now that’s brave!

Ceiling of the Eroica Saal at the Palais Lobkowitz

A temporary respite from the hostilities between Napoleon and Europe was holding. Beethoven embraced this revolutionary turmoil and the ideals of liberty, equality and fraternity, and firmly placed himself as an artist at the centre of his third symphony by writing what he felt, and what he wanted, breaking away from the accepted symphonic structures and norms at the time. It was a beacon of originality. He was a man who had entered into the most creative period of his life.

The BBC dramatised the event of the private premier of the third symphony in the film, Eroica, with the strapline: the day that changed music forever. It was first broadcast in 2003, written by Nick Dear and directed by Simon Cellan Jones. The film follows Ludwig, Ferdinand Ries, the Lobkowitz family, friends, and the musicians as the new music unfolds on an unsuspecting audience, and takes you on Beethoven’s personal journey into the history books.

What I love about this film is the care and accuracy with which it was made, drawing on the recollections of Ferdinand Ries (Beethoven’s pupil and secretary), and from reports about the event.

Ian Hart plays Beethoven just how I imagine him; enthusiastic about his music, bold, dynamic, forthright, (blunt even), brutally honest, brusque, impatient, with frequent outbursts of temper, but underneath that he displays a simmering passion and tenderness for his lover, the widowed Countess Josephine von Deym.

The Orchestre Revolutionnaire et Romantique directed by Sir John Eliot Gardiner perform the music on authentic, period instruments (none of the violins have chin rests, which were yet to be invented), and in the numbers and proportions that Beethoven intended it for.

I love the way it switches from Beethoven walking with Ries to the Lobkowitz residence, to the palace staff going about their business, getting ready for the event, and the musicians, especially the horn player, Otto, who is known to Beethoven.

The camera work is very sensitively done, moving around the sections of the orchestra as they tackle this new, epic work, and capturing their shocked reactions at the nature of the notes and markings presented to them by Beethoven’s copyist Wenzel Sukowaty.

It is longer, more difficult and unlike anything they have ever attempted or played before, and a few re-starts are required until Beethoven is satisfied that they have reproduced the sound he wants. 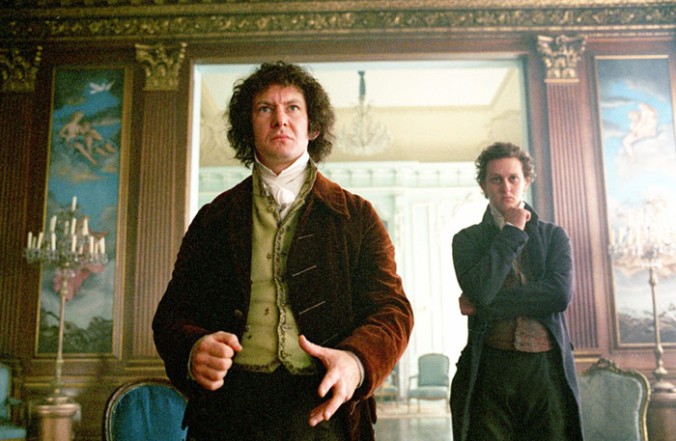 It’s unthinkable that a modern orchestra would sight read a new symphony at its premiere (private or not), let alone consume beer before doing so. They might start seeing more than one baton!!

There are so many magical touches, one being the introduction of Beethoven to Prince Lobkowitz’s cousin, Count von Dietrichstein; and when asked if he is a land owner, Beethoven proclaims that he is a brain owner! Dietrichstein shows himself to be egotistical, ignorant and rigid in his ideas about music, but strangely his views on Napoleon Bonaparte turn out to be erudite.

We see a scene where the musicians, exhausted from their exertions are having a break and some lunch, and begin to debate the war and Napoleon’s agenda.

Beethoven’s views that an artist is on the same level as the nobility, are borne out by his behaviour and of course Ries’s comment, ‘that he doesn’t accept the inequality,’ to the copyist, who replies, ‘men have been executed for less.’ It could be considered heroic that Beethoven never compromised his artistic integrity for the whims or desires of any of his wealthy and titled patrons.

There is a very endearing moment when Beethoven and Josephine are alone discussing his marriage proposal, and she refers to him as ‘Louis’. However, it does not go well.  It’s my personal view that Josephine was his ‘Immortal Beloved’.

In the third movement we glimpse Beethoven’s distress and distracted expression as he deals with his rejection from Josephine, whilst directing the scherzo marked allegro vivace, which personifies his hot-blooded nature.

The elderly Haydn’s entrance just before the start of the fourth and final movement is brilliant, as is the ensuing exchange of comments about students, and what idiots they are. The inference is not lost on Beethoven, who was championed by Haydn and became his student as a young man in 1792.

I’m going to shut up now, and let you watch the film uninterrupted!

Beethoven’s idealism and his abhorrence of tyranny are at the root of the Eroica. The fervour of freedom embodied by the Eroica is just as relevant and ground-breaking today as it was 210 years ago. There is always room for heroism in our lives!

Neither before or since, has music evoked such passion as Beethoven’s. He was in-tune with his creative spirit, and had endured more than his fair share of suffering; so who better than Herr Beethoven to write music that represents the struggle and overcoming of life’s challenges?

When asked by a close friend some fourteen years later, which was was his favourite symphony, Beethoven responded without hesitation: ‘the Eroica.’

We know that with the inevitable onset of his deafness and heart-break, that his heroism would eventually far outshine what he achieved in the summer of 1804. But for me, it’s the starting point of his heroism, it’s the moment we are blessed by his courage and the music that gives us a first insight into the depth of his spirit.

“He gives us a glimpse into his soul. Everything is different from today.” ~ Joseph Haydn (from the BBC film Eroica).