You’re probably thinking that the topic of bridges doesn’t sound particularly exciting, but for some reason I have a fascination with them. I’m in awe of their designs and feats of engineering, (it’s one thing to draw some plans on paper and quite another to build one that spans miles of water or stretches over deep chasms and ravines. My mind wonders how they manage to stay put and remain firm and safe under continual assault from the elements and with multitudes of people and cars crossing them.

There are so many iconic bridges I’d love to cross. Up there would be the Golden Gate Bridge, the Capilano Suspension Bridge in Vancouver, The Seven Mile Bridge spanning the Florida Keys, the Oresund Bridge from Denmark to Sweden, the historic Ponte Vecchio in Florence and the Millau Viaduct in Southern France. I hope I’d have the nerve to go to the edge of the Stairway to nothingness at the Dachstein Glacier Resort in Austria.

The Sydney Harbour Bridge and the Brooklyn Bridge both offer stunning city views, but a bridge doesn’t have to be epic to be brilliant in my book.

I found the Rialto and the Bridge of Sighs in Venice very sweet and romantic.  I even love the little Hertford Bridge, similar to, but much smaller than the Rialto, which joins two parts of Hertford College over New College Lane in Oxford. Needless to say I absolutely loved the Charles Bridge in Prague! I always think of the opening scene of Mission Impossible. It’s dark, eerie and shrouded in mist, and well, you know, the agents all get bumped off except Ethan…

If you feel that way inclined you can do a bridge climb over the Sydney Harbour Bridge:

These two guys must be off their rockers! The Russky Bridge Vladivostok:

One for all you adrenaline junkies! 25 Scary Bridges:

That’s all very well you may say, Ginny, but what about the two bridges? Well, I’m getting there.  Who would have guessed that Buckinghamshire and Budapest would share a close link? 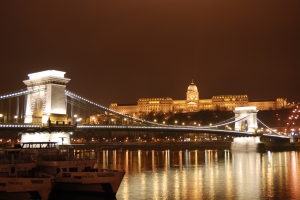 The Chain Bridge in Budapest is both massive and elegant. Straddling the Danube, it joins Pest to the ancient Buda side of the city, topped by its lofty and imposing castle that looks down over the sparkling capital. I had a great couple of days working in the city inspecting hotels that were contracted for the Hungarian Grand Prix. I remember the historical Gresham Palace (facing the Chain Bridge on the Pest side) was being renovated ready to house what is now the luxurious Four Seasons Hotel.

Around fifteen years after that trip whilst doing some research for my novel, The Virtuoso, I discovered the link between the two places. I’ve been going to Marlow for many years, but because I didn’t delve into its history until recently, I’ve only just made the connection.

Marlow is a local and picturesque market town on the banks of the River Thames in South Buckinghamshire.  It has a pretty white suspension bridge that spans the Thames, linking Marlow to the village of Bisham in Berkshire. Just on the other side of the bridge from the town end nestles the famous Compleat Angler Hotel.

Marlow is famous for its annual summer regattas, and was also home to Percy Bysshe Shelley and Mary Shelley, who moved into West Street in 1816.  The writer and poet T.S. Eliot was also a resident of West Street during the First World War. It is also rumoured that Henry VIII courted Jane Seymour on the land where the Georgian House stands, known as Court Garden, which also has a bronze statue on its lawn erected to our most successful Olympian, the five times Gold medal winner – rower Sir Steve Redgrave..

Low and behold it turns out that the Marlow Suspension Bridge, built between 1829 and 1832 and the Széchenyi Chain Bridge in Budapest (completed in 1849) are almost identical, except in scale. They were both designed by the same Victorian era English civil engineer – William Tierney Clark.

The Marlow Bridge was the smaller prototype that preceded its larger sibling in Hungary, built to replace a wooden bridge further downstream, which had collapsed in 1828. 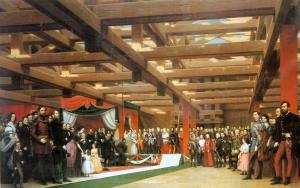 Construction in Budapest was supervised by the Scotsman Adam Clark. At the time of its completion in 1849 the Chain Bridge was the first permanent bridge to span the Danube in Hungary and one of the largest of its kind in the world.

A plaque on the Pest side of the river reads “To commemorate the only two surviving bridges designed by William Tierney Clark: The Széchenyi Chain Bridge over the Danube at Budapest and the suspension bridge over the Thames at Marlow, England.” A similar plaque has been placed on the Marlow Suspension Bridge, photographed here, if you can read it!

Tierney was among the earliest designers of suspension bridges, and his first bridge was the Hammersmith Suspension Bridge in London, which opened in 1827.  This bridge has since been replaced by a later one designed by Sir Joseph Bazalgette. I have spent many traffic jams driving home from London on that particular bridge…