At first glance this Italian Renaissance painting appears to be depicting your average 16th century lavish Venetian banquet; but when you focus on the central figures beneath the middle arch it becomes apparent that it’s actually a scene of Jesus and his twelve disciples at The Last Supper. 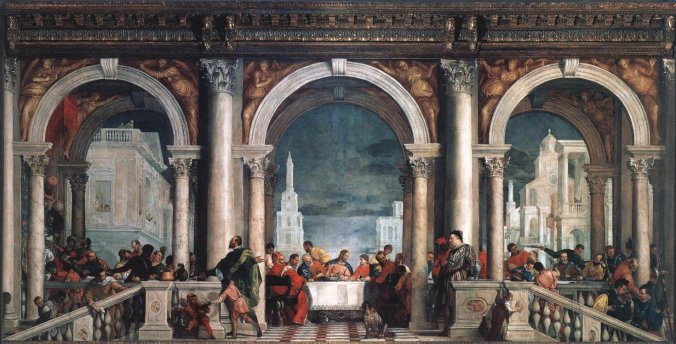 The Last Supper was in fact the painting’s original title, as commissioned by the refectory of the Convent of San Giovanni e Paolo, to replace Titian’s Last Supper which had been destroyed by fire in 1571. The monks did not take umbrage at the painting’s contemporary aristocratic setting and adornments.

The Inquisition however, took a more pejorative view! During the political and religious landscape of the Counter-Reformation all religious art works had to strictly convey the spiritual message and theological doctrine that was dictated by the Roman Catholic Church.

A brush with the Inquisition!

Despite its magnificence as a work of art, the Last Supper got Veronese hauled up before a tribunal of religious inquisitors who were less than impressed with the painter’s secular additions.

Some of the questioning went along these lines:

TI: Why have you depicted buffoons, drunkards, Germans, dwarves, and other like fooleries?

PV: We painters take the same licence as do poets and madmen…for ornament, as one does.

TI: Who do you think had been present at the Last Supper?

PV: I believe that there was only Christ and His Apostles; but when I have some space left over in a picture I adorn it with figures of my own invention…

TI: Has anyone given you orders to paint Germans, buffoons and similar figures in this picture?

PV: No, but I was commissioned to adorn it as I thought proper; now it is very large and can contain many figures.

TI: Should the ornaments in the picture not be suitable to the subject…or have you put them there only to suit your fancy, without any discretion or reason?

TI: Do you not know that in countries that were besieged by heresy- particularly in Germany- many such pictures full of foolishness had been painted in order to ridicule the Catholic Church?

PV: I agree that it is wrong, but I repeat what I have said, that it is my duty to follow the examples given me by my masters.

TI: What have your masters painted?

PV: In Rome, in the Pope’s Chapel, Michelangelo has represented Our Lord, His Mother, St. John, St. Peter, and the celestial court; and he has represented all these personages nude, including the Virgin Mary, and in various attitudes not inspired by the most profound religious feeling. (I bet he thought he’d stumped them with this reply).

TI: Be advised that clothing was not necessary at the Last Judgement, but no foolishness was present there either.

PV: I do not pretend to (defend) it, but I had not thought that I was doing wrong; I had never taken so many things into consideration.

A page from the transcript of the Inquisition.

It must have been a trifle intimidating being questioned thus about his motives and his art. Not wanting to fall foul of the Inquisition and the Catholic Church, Veronese agreed on a solution to correct the picture according to the requests of the tribunal at his own cost.

Veronese may have felt more defiant than he let on, and rather than alter the picture as directed, he simply changed the title of the painting to The Feast in the House of Levi, and the Inquisition was satisfied.

When compared with other Last Supper paintings by the likes of Leonardo da Vinci and Jacopo Tintoretto the questioning of Veronese by The Inquisition appears concordant with what they were trying to achieve. 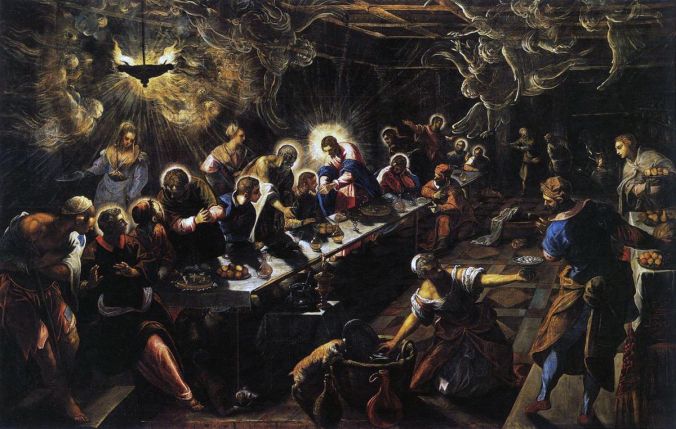 The Last Supper by Jacopo Tintoretto

Paolo Veronese was clearly not burdened with the same concerns, as he wanted to put his own artistic spin onto the traditional biblical scene.

The revised title refers to an episode in the Gospel of Luke, chapter 5, in which Jesus is invited to a banquet:

And Levi made himself a great feast in his own house: and there was a great company of tax collectors and of others that sat down with them. But their scribes and Pharisees murmured against his disciples, saying, Why do you eat and drink with tax collectors and sinners? And Jesus answering said unto them, They that are whole need not a physician; but they that are sick. I came not to call the righteous, but sinners to repentance.

The Feast in the House of Levi

What I love about this painting is the vibrancy and range of colours, and its realistic rendering as a supper that may have taken place in the grandeur of Veronese’s Venice. The diversity of people in their cultural and social depictions highlights Venice as an important and eclectic centre of trade, culture and wealth in the late 16th century.

Veronese had painted what he knew best – people. Whereas his older contemporary, Titian, was more concerned with exploring the psychology of his subjects, Veronese painted people in their outward public appearance, in realistic activities and attire for the era. It would have placed the Last Supper in a setting viewers could relate to; in many ways making it more human and accessible to its audience.

You have the divine figure of Christ in the centre, engaged in teaching and sharing with his disciples, and around them (almost as if the holy party aren’t really there), a whole raft of ordinary people: Venetians, merchants, moors, German guards, various guests, jesters and animals, feasting without a care in the world.

Detail of the Germans

It probably seemed entirely feasible to him that Jesus would tolerate a cat gnawing and playing with a bone at his feet beneath the table, with a dog curiously looking on, or a parrot sitting on the arm of a dwarf.

The sumptuous green clothes of the wealthy man on the left portrays an open, communicative stance, whilst the corpulent Venetian guest on the right of the central archway comes across as more inebriated; his belly full of food and wine, his stripy robe somewhat dishevelled and saggy, his skin pallid and sweaty, as if he suffering the after effects of a little too much indulgence…

The smooth marble pillars of the three archways are formidable and luminous, anchoring the scene in a majestic backdrop, where from behind the figures ghostly silhouettes of buildings glow in the moonlight of an immortal Venetian evening.

His use of colour and attention to detail of the ordinary folk gives us an evocative snapshot into the more decadent side of life in Renaissance Venice. 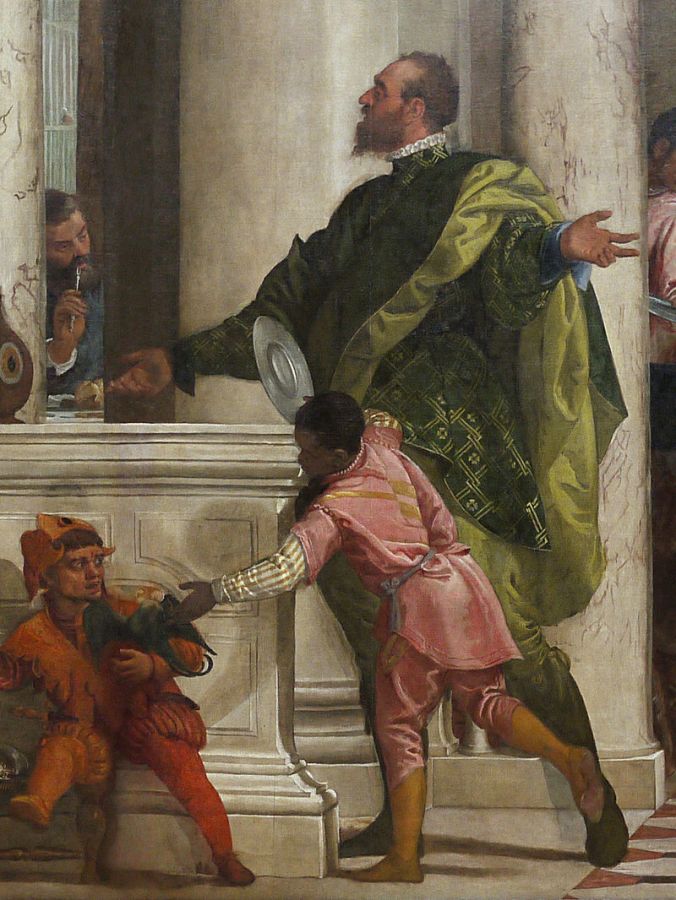 The Lord Jesus Christ is depicted in a translucent salmon tunic with a dark blue cape with his loving light surrounding his head; in deep conversation with Saint John, as Saint Peter listens whilst helping himself to a leg of lamb. Even though they are the chosen ones they are still shown in their human aspects.

The traitor Judas, the figure in dark red in the shadows, to the right of Saint John on the opposite side of the table is looking away from his Lord, likely ashamed of the betrayal he has agreed to commit, knowing it will lead to Christ’s crucifixion. He seems afraid that Jesus will see through him to the vile act in his heart, even as Jesus already knows what will happen.

Born Paolo Caliari in Verona, Italy, the son of a stonemason; his birthplace immortalised his artistic name, Veronese. 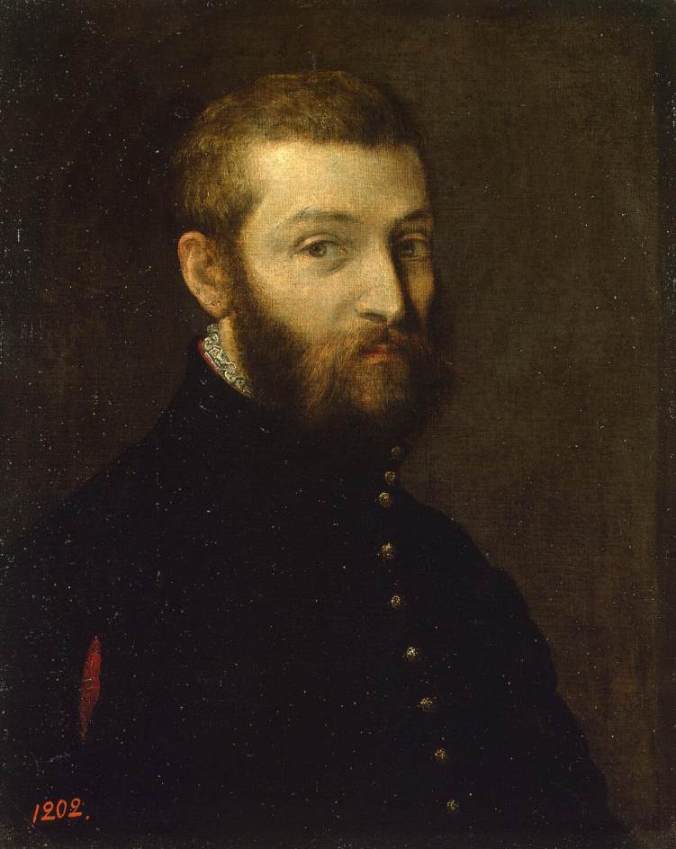 He joined the workshop of his uncle Antonio Badile before studying under Giovanni Francesco Caroto (1480-1546) and subsequently working on the decoration of Venetian villas.

Veronese created numerous pastoral frescoes in well-known villas such as the Villa Barbaro by famed Renaissance architect Andrea Palladio in Maser. He gifted aesthetic beauty to the walls and ceilings of the houses and churches of ‘La Serenissima’.

As a fun-loving Venetian patron of Veronese you would have been confronted with the imaginary landscapes, lively festivals and various illusory effects that served as a backdrop to your entertainment and possibly your portrait.

Another of his grand banquet scenes was the Marriage Feast at Cana (except it’s Venice); an explosion of colour and an extraordinary depiction of humanity ensconced in celebration.

Forerunner to the Baroque era

Veronese’s ceiling paintings of Esther Brought Before Ahasuerus and The Triumph of Mordecai in the Church of San Sebastiano as well as The Rape of Europa in the Doge’s Palace are particularly ahead of their time, providing a model for the Baroque style that was soon to sweep the continent.  Perhaps he had anticipated the coming epoch.

Veronese’s legacy was partly as an influence for Giovanni Battista Tiepolo, one of the most important Baroque fresco painters.

The Complete works of Paolo Veronese:

Veronese’s final painting was his homage to the Serenissima, The Triumph of Venice. It was completed just three years before his death and had taken him five years of toil. It shows the people of the republic willingly surrendering to Venetian power, and among the envoys paying their respects is no less a figure than the French King Henri III.

The Apotheosis of Venice by Paolo Veronese

I wish I could have seen his exhibition when it was on at The National Gallery in London, although I think the Feast in the House of Levi was too large to transport:

If pomp and splendour was your pleasure, I doubt anyone else could have outshone or outdone Paolo Veronese!

There are three Venetians that are never separated in my mind — Titian, Veronese, and Tintoretto. ~ John Ruskin Art Culture : A Hand-Book of Art Technicalities and Criticisms (1877)