‘Tis a grisly tale of death, debauchery and sinister, secret goings-on, some 300 feet underground. I hope you are not faint of heart! 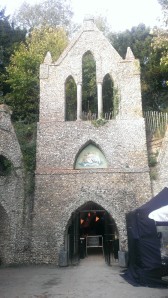 As it’s Halloween this Friday I thought I would relay the hair-raising account of our family trip last Sunday into the depths of the Hell Fire Caves, not far from where I live.

We were fortunate to grab the last tour of the day (they only run these guided tours once a month), and our tour guide, Jack, had a flair for the dramatic. We imbibed his enthusiasm and knowledge of the infamous and secretive ‘Hell Fire Club’ from the moment we stepped into the damp, dark corridor beneath the stone frontage of the caves.

He began by explaining in a rather comical fashion about the House of Hanover and the four Georges who were monarchs in Georgian England. When he mentioned that George 3rd apparently rode invisible horses, my daughter Emily, said to him most earnestly, ‘So does my sister!’ I was glowing with pride! That set the tone for a scary, fun and fascinating 45 minutes to follow. 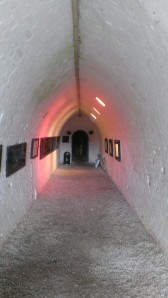 We walked about fifty yards down the sloping tunnel, to learn that times were tough in 1747. The farmers of the village had suffered three consecutive failed harvests, and so the enterprising Francis Dashwood, 15th Baron le Despencer paid around a hundred men who would have been agricultural workers around a shilling a day, to dig out the caves. Little did they know the profligate purposes he intended to use it for!

They began work at 4 am, armed with a pick axe and candle, and if they were lucky they were allowed ten minutes for a break and to consume some ale and bread during their gruelling twelve hours beneath the ground.  I’m sure they would have been grateful for the EU labour laws in place today.

The caves were completed in 1752 and reached about a quarter of a mile into the hillside. The displaced chalk was used to build a new road from West Wycombe to High Wycombe, now a section of the A40 from London to Oxford.

1752 was a fairly momentous year… Great Britain and the American colonies lost eleven days to the annoyance and bewilderment of its citizens, as the switch was made from the Julian Calendar to the Gregorian Calendar, which was already in use in other European countries. Benjamin Franklin tested the lightning rod, Moscow was besieged by fires, the Liberty Bell arrived in Philadelphia, and the noted pianist and composer Muzio Clementi was born.

Sir Francis Dashwood and poet Paul Whitehead were best friends and the two founding members of the ‘Hell Fire Club’. They were later joined by lords, politicians and prominent men of the era, who wanted society to remain ignorant of their louche undertakings in sleepy West Wycombe. 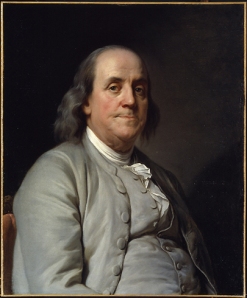 Among others, some of the most well-known members of the notorious ‘Hell Fire Club’ were: John Montague, the 4th Earl of Sandwich, (and inspiration of the favoured lunchtime food), who was First Lord of the Admiralty, Thomas Potter, son of the Archbishop of Canterbury, Dr Thomas Thompson, physician to the Prince of Wales, John Norris, MP and Don at Magdalen College, Oxford, John Wilkes, MP and Lord Mayor of London, painter William Hogarth, Sir John Russell, Sir John Aubrey, Sir William Stanhope, MP for Buckinghamshire, Francis Duffield, owner of Medmenham Abbey (where some of the same individuals first met in secret under the name of the Knights of St. Francis of Wycombe), and Benjamin Franklin, who was visiting from across the pond, espousing the benefits of the union of England and her American colonies. Little did they know that utopia wasn’t to last…but he nevertheless became very good friends with Sir Francis Dashwood and his powerful and wealthy cohorts.

These were the clandestine ‘rockers’ of their day, pushing the boundaries of decency behind their respectable public personas, privately discarding the religious morals of their time.

We stopped again a little further down to learn about the 22 steps, (not a follow-up novel by John Buchan), where it was recently discovered that another passageway had been sealed up when the caves were closed. A specialist team from Oxford had recently confirmed the existence of another tunnel, but due to the way it had been sealed was considered unsafe to reopen at the moment. 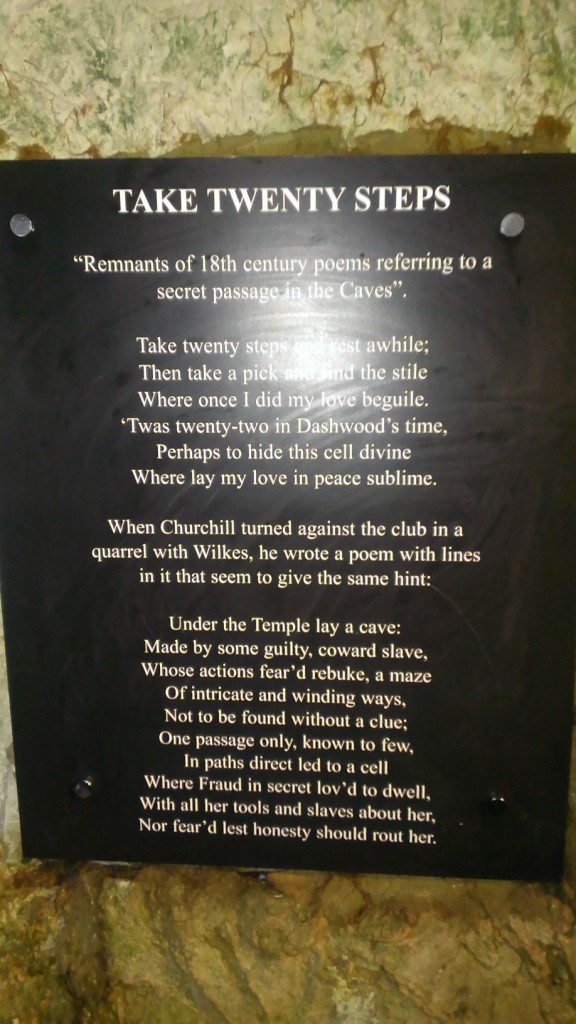 They suspect it eventually opens out under the floor of St. Lawrence church, where the vicar had the floor pulled up due to warping, to find a bricked layer that concealed a long drop down… 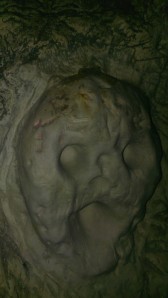 We came upon numerous macabre faces carved at intervals into the chalk walls, representing the Pope, the Devil, a demon, and other ghoulish beings, the work of artist William Hogarth. They must have known their ‘blasphemy’ would earn them a one-way ticket into Hell itself, and so fashioned their secret club in mock religious terms. The arches down into the caves and throughout are shaped like those in churches. You can tell they were highly contemptuous of the Roman Catholic Church!

Francis Dashwood was heavily influenced by the monk and writer Francois Rabelais (1494 – 1553), adopting one of his phrases from Gargantua, ‘Do what thou wilt’ as his personal motto. Dashwood travelled extensively and was also interested in ancient Egyptian, Greek and Roman mythology. 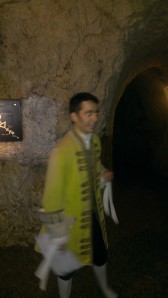 Further down we entered the massive ‘banqueting hall’ which is around forty feet across and fifty feet high, directly beneath the Mausoleum at the top of West Wycombe Hill. It even had the original 18th Century metal chandelier fitting still attached to the ceiling. According to our guide it once held in place the opulent rose quartz chandelier that Lord Dashwood had hung in the chamber. It is the largest man made chalk cave cavern in the world. Not bad for a cave hewn out of the hillside in 1748.  There are various devotional side ‘chapels’ that would have had beds in them, and there would have been a large dining table in the centre of the cavern.  Entertainment in the form of music and singing was also had in the massive chamber. They probably didn’t feel the cold if they were engaged in suspected hedonistic activities and worse; but we shall never know the true extent of what went on.

Paul Whitehead, who was the club’s steward, burnt all his papers and manuscripts in the three days before his death in 1774, knowing that his accounts of their nefarious deeds would have proved just too shameful for public consumption. Even more macabre, he bequeathed his heart and the sum of £50 for a marble urn to Lord Dashwood, which was duly cut from his corpse and placed in the urn, which was then placed in the mausoleum in an elaborate ceremony lead by Lord Dashwood. It remained there until it was stolen during the Victorian era. 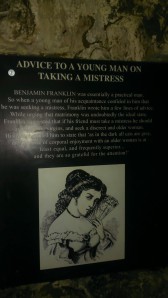 There is a very sad tale relating to the banqueting hall that took place after the caves were no longer in use, again in the Victorian years. A pretty young chamber maid named Susanna who worked at the George and Dragon tavern in West Wycombe was rather popular with the local lads, but she rejected them to become the mistress of Lord Pitt. Sukie, (as she was known), received a love letter from her lord, telling her he wanted to elope with her and marry her, requesting her to meet him at midnight in the banqueting hall of the caves. Dressed in her mother’s bridal gown and holding a candle she followed the voice of the man she thought was her beau. When she reached the chamber it became obvious she had been lured there for other purposes, and several of the previously rebuffed local boys were mocking her. Angry and heartbroken, she hurled stones at her cruel tricksters, but when they threw a rock back it hit her in the head, and she collapsed. The cowardly boys ran, leaving her alone and injured in the dark. When it was discovered that she was missing the next day the boys owned up to their prank, and she was found dead in her blood stained white dress just fifty yards from the entrance.

This tragic story led onto talk of ghosts, hauntings and paranormal activity, and poor dear Sukie is said to be the Lady in White that many have reported seeing throughout the caves. I was not surprised to learn that the caves have been voted by BuzzFeed as the second scariest place in the UK.  Our guide quite openly admitted that the deepest reaches of the cave at 300 feet below ground scared even him. I have to admit, it was very cold and creepy, I’d hate to be alone down there.

An interesting interview about possible hauntings and paranormal activity with the founder’s descendent, Sir Edward Dashwood, about the Hell Fire Caves:

Deeper still, we came to the parting of two tunnels, known as Judgement’s Pass. Our guide put on his deepest, most serious, judgmental voice, wanting to know if we were either sinners or pious people, and to think carefully about our answers, as it would determine whether we took the left or right tunnel. So when he stared at each of us and asked, “Are you good, or are you or bad?” Emily, who had once again been paying close attention to his brilliant commentary, chirped up that she wasn’t sure, “Because I haven’t tidied up my bedroom.” I’m sure they must have heard our shrieks all the way up in the café. As it happens, both tunnels lead to the same chamber, the wine cellar. 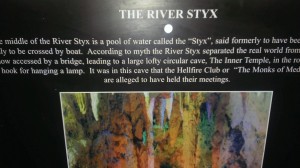 Only the ‘Twelve Apostles’ were permitted to go beyond this point, across the artificial River Styx and into the ‘Inner Temple’. This is where the tale gets even more bizarre…

It is said that John Wilkes played his prank on the 4th Earl of Sandwich at a gathering of the twelve Apostles. Wilkes pulled out a large mahogany chest, which was accompanied by quite an authentic creaking noise from our guide to demonstrate its opening, whereby out leapt a large baboon dressed as Satan, which promptly took a liking to John Montague. Hysterical, and then angry, as he saw the laughing faces of the other members, he stormed off threatening to spill the beans on their unsavoury subterranean secrets.

The ‘Hell Fire Club’ was duly exposed in humiliating fashion in the House of Lords, as the Earl of Sandwich read out the salacious poem by Thomas Potter and John Wilkes titled ‘Essay on Woman’ to satisfy the prurient curiosity of his fellow Lords in 1764. Potter was imprisoned and Wilkes fled to France.

The American Revolutionary War broke out in 1775 and Benjamin Franklin had returned home, having changed his mind about the colonies, becoming one of the key Founding Fathers of the United States of America.

Eventually the ‘Hell Fire Club’ disbanded, having been publicly routed.  So it seems rather fitting that their beastly activities were ended by a baboon!

Obviously Hell hath no fury like a Lord scorned…

An interesting blog: Secrets of the Hell Fire Club

The Hell Fire Caves were opened to the public as a tourist attraction in 1951. 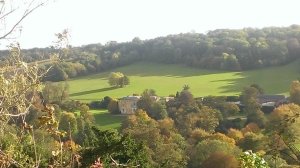 I can thoroughly recommend them (and indeed the surrounding West Wycombe Park and Mausoleum) if you are ever in the Chiltern Hills and bonny Buckinghamshire, but maybe not on Halloween night!