“Stars, hide your fires; Let not light see my black and deep desires.” ~ William Shakespeare, The Tragedy of Macbeth

This latest film joins the ranks of earlier TV and movie adaptations, providing a realistic, gritty and modern version with a dark touch of the supernatural, which is bound to be popular.

It’s probably no coincidence that Shakespeare penned The Tragedy of Macbeth during the reign of King James I of England (formerly King James VI of Scotland), between 1599 and 1606 with characters based on real people from Holinshead’s Chronicles.

Whilst not exactly a verse for verse reproduction (as films of plays rarely are), I think it’s true to the spirit of the play. A look behind the scenes with director Justin Kerzel and his two stars:

This Film 4 production of Macbeth is an assault on the senses. It’s not just that what you see is so brutal and visceral; it’s the intensity with which it is portrayed that is so startling.

Michael Fassbender as the tortured Macbeth and Marion Cotillard as his scheming wife are in a league of their own. Worthy of mention is David Thewlis as the King of Scotland, Sean Harris as Macduff (the Thane of Fife) and Paddy Considine as Banquo.

To sum up Macbeth the film in a few words, I would say it’s totally mesmerising, disturbing and compelling. 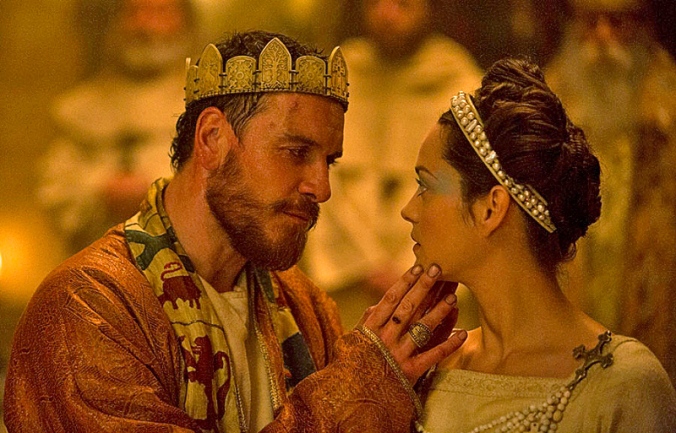 The cinematography is as epic as the on-location highland scenery of Scotland; misty mountain moors place you at the burial of the Macbeths’ child at the start. It is cold, windy and inhospitable.

Tragedy starts it all off, and tragedy certainly ends it.

We see Macbeth (the Thane of Glamis), with Banquo and his depleted army by his side, fighting for King Duncan of Scotland against Macdonwald and his group of Scottish, Irish and Nordic rebels.

Every gory detail, every scream and pained expression is framed in slow motion; including the urgency of Macbeth to reach the traitors. In the midst of the bloody battle he sees through the mayhem and smoke, three female figures and one child. They are standing where Macdonwald was. The moment seems to last forever. Then the fighting proceeds at full pelt again and Macbeth eventually emerges weary but victorious.

As he and Banquo respectfully place their dead into a pit the witches approach them. It is the fateful moment when you just know that double double, toil and trouble will haunt Macbeth ’till the end of his days. The sinister prophecy is spoken by the ‘weird sisters’. They finish with, “All hail Macbeth,” before disappearing back into the fog.

At this point echoes of “all hail Caesar” are in my mind, and you know it’s not going to end well.

It is with these words playing in his mind that he returns to his wife and village. Soon after he is rewarded by a grateful King Duncan who bestows on him the title Thane of Cawdor as foretold by the witches, and his thoughts turns to the crown.

The spellbinding 1979 performance by Judi Dench of Lady Macbeth’s soliloquy after she hears of Macbeth’s strange and prophetic visitation:

Macbeth is persuaded by Lady Macbeth (whilst they engage in carnal pleasure), to do away with Duncan as he sleeps in his tent at their home. Sexually sated and consumed with a deadly purpose, Macbeth walks menacingly towards the king’s tent.

Torrential rain is falling and while Duncan’s body guards lay slumped in a wine induced stupor he commits regicide in a frenzied dagger attack.  Lady Macbeth later places the bloody daggers into the hands of the sleeping guards to deflect blame from her husband. Gruesome as this murder is, it’s not the most horrifying scene in the film.

The rain may have washed the king’s blood off his hands, but it’s now ingrained in his soul, the poison has already begun its inevitable journey to Macbeth’s heart. You see the glint of unbridled ambition burn in his eyes. The acting is just chilling.

A little water has not ‘cleared them of their deeds’ as Lady Macbeth suggested it would in the aftermath of Duncan’s murder, in an attempt to assuage them of guilt.

Once the ‘gold round’ is on his head Macbeth slides further into paranoia and hunger for total power. You see that he is cursed as he ponders the witches words, the fact that he has no heir and has won the royal line for Banquo’s seed. Macbeth tells his wife whilst pointing a dagger at her empty womb, “Full of scorpions is my mind”.

And so his henchmen hunt down and strike down the unfortunate loyal Banquo in an act of utter betrayal that is only slightly lessened by the fact that his son, Fleance escapes the steel blade of his father’s slayers. Distasteful as it is, it’s still not the worst scene in the film.

The weirdness of the banquet seals Macbeth’s fate. The sight of his murdered friend Banquo at the table confounds and confuses Macbeth, now racked with guilt over his treachery, causing him to react strangely and lose face among his people. Macduff begins to smell a rat and leaves.

Another visit to the witches leaves Macbeth confident of his victory, killing off his last remnants of kindness and moral rectitude. He is now dead inside and willing to stop at nothing to crush his enemies.

I’m not sure I can articulate the horrors that Macbeth goes on to commit; the grief etched on Marion Cotillard’s face show us his wife cannot believe that he is capable of it either. The latter part of the movie has some pretty haunting scenes, which prove too much even for Lady Macbeth.

In her sleep she is dreaming she’s back at the chapel of their old village with her dead child. She is tired of the power struggles and the monster her husband has become, a path that she herself pushed him onto. It makes for a poignant scene.

Here are her words taken from the text in what is Act 5 Scene 1 of Shakespeare’s play:

Yet here’s a spot.

Out, damned spot! out, I say! – One: two: why, then, ’tis time to do’t. – Hell is murky! – Fie, my lord, fie! A soldier, and afeard? What need we fear who knows it, when none can call our power to account? – Yet who would have thought the old man to have had so much blood in him.

The thane of Fife had a wife: where is she now? – What, will these hands ne’er be clean? – No more o’that, my lord, no more o’ that: you mar all with this starting.

Here’s the smell of the blood still: all the perfumes of Arabia will not sweeten this little hand. Oh, oh, oh!

Wash your hands, put on your nightgown; look not so pale. – I tell you yet again, Banquo’s buried; he cannot come o

And thus, she never wakes up. Meanwhile an inconsolable Macduff and Malcolm (the elder son of Duncan), return from England to Dunsinane to wreak revenge on Macbeth for their murdered loved ones.

Fire now rages beyond the walls of Dunsinane and Macbeth goes defiant into battle once more. In one on one combat he has his sword at Macduff’s throat – believing he cannot be harmed by a man born to a woman – when Macduff splutters that he was untimely ripped from his mother’s belly.

Macbeth seems only now to fully comprehend the evil empty promises that the witches have instilled in his mind and the hatred he felt for Macduff evaporates into the red smoke that fills the screen, as the camera hones in on their darkened bodies and grubby, agonised faces, the outer sign of their troubled souls.

Macbeth then allows Macduff to strike him down on the battlefield. The final scene shows a courageous Fleance pulling Macbeth’s sword from the scorched earth and running into the distance like a child warrior.

This film is a very human tale of seduction, deceit, quest for political power and betrayal. My sympathy for Macbeth only returned at the very end; a broken, pitiable figure when he recognises the tyrant he has become and what it has cost him.

It’s gut churning action and powerful soliloquys from beginning to end. All in all, a gripping film, even if the turn of events are hard to watch at times. I emerged from the cinema into a cold rainy night somewhat traumatised!

A must see for Shakespeare connoisseurs and Bardolaters alike…

Creeps in this petty pace from day to day,

To the last syllable of recorded time;

And all our yesterdays have lighted fools

The way to dusty death. Out, out, brief candle!

Life’s but a walking shadow, a poor player,

That struts and frets his hour upon the stage,

And then is heard no more. It is a tale

Told by an idiot, full of sound and fury,