“My illustrious lordship, I’ll show you what a woman can do.” ~ Artemisia Gentileschi

Not long after her wedding to Pietro Antonio di Vicenzo Stiattesi in Rome on 29th November 1612, Artemisia and her husband moved to Florence; where, armed with a letter of introduction from her father, she began her career as a professional painter.  It proved to be a successful and fruitful time in her life, (she certainly deserved some good fortune after the traumatic events in Rome as a young woman). 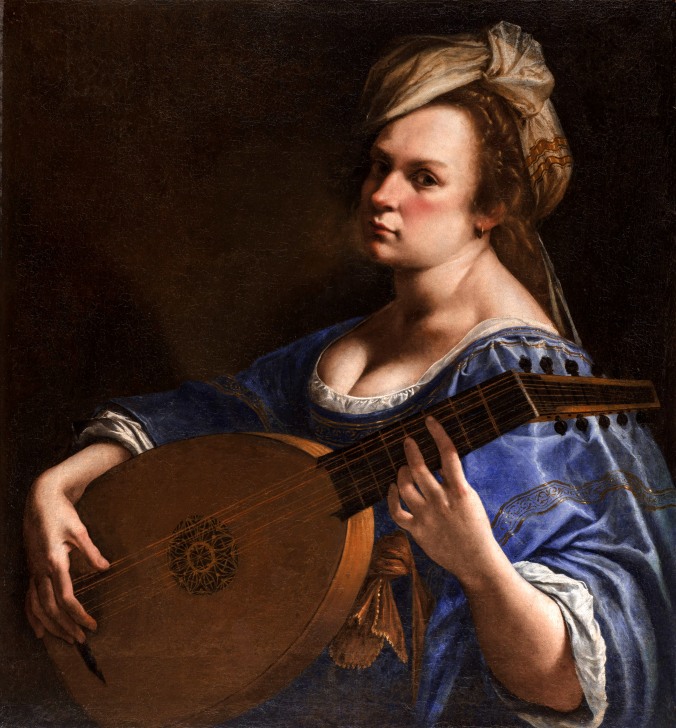 Self-portrait as a Lute Player c. 1615 – 17 by Artemisia Gentileschi

Florence and the Medici Court

Soon after arriving in Florence the ambitious Artemisia landed a commission from Michelango the Younger, great nephew of the Renaissance icon. She painted a panel, the Allegory of Inclination, for the Galleria of his Casa Buonarroti.

Artemisia set about educating herself in the spheres of music and literature, employing her beauty and charm to impress the wealthy merchants and nobles of Florence, with the aim of ingratiating herself with the powerful, dynastic Medici Court.

She understood that the appropriate appearance would elevate her position, so she wore expensive silk gowns which she managed to purchase on credit. She gave it some good, old fashioned hustle!

After all the struggle of her painful last year in Rome she had earned some success.

Her living was made mostly by painting commissions from wealthy patrons and for Grand Duke Cosimo II de’ Medici and Grand Duchess Christina. She was friends with Galileo Galilei – excerpts from her letters to the astronomer, physicist and philosopher still exist.

Tragedy, however, would strike again in her life. The first three of her babies with her husband Pietro did not survive infancy, and her fourth, a daughter, was named Prudentia after her deceased mother. Like her father had done with her, Artemisia taught her to paint.

She eventually left her husband in 1620 after financial problems arose, returning to Rome in 1621. She spent a decade travelling Europe, painting in Genoa, Venice and England (where she was reunited with her father at the court of Charles I), before settling permanently in Naples.

A View of the Bay of Naples by Giovanni Battista Lusieri

Before the unification of Italy in the nineteenth century, Naples came under Spanish rule when it was the largest commercial, cultural city on the Mediterranean. In Artemisia’s day it was three times the size of Rome. She spent the last years of her life in Naples and continued painting into her sixties. She taught male students and collaborated with other painters during this time.

The biblical story from the Book of Judith tells of how the beautiful Israelite widow Judith bravely slays the Assyrian General, Holofernes, in order to save the people of her homeland, (the city of Bethulia). It proved a popular subject in Renaissance and Baroque art.

In return for sparing her life and that of her family, Judith had promised Holofernes a secret route into the city in an act of apparent betrayal. Due to his desire for her he admitted her to his tent and gave her free access to the Assyrian camp. Being Jewish, Judith would have taken her own food with her and perhaps a maidservant.

Thinking that his personal conquest of Judith is assured, Holofernes lets down his guard and drinks himself into a stupor. As he sleeps, Judith summons up her courage to decapitate him using his sword. The two women put his head in a sack and sneak out of the camp. The next morning, as the head of Holofernes is displayed on the battlements and the rest of his body is discovered, his men flee, having lost their leader and, quite literally, head of the army.

The chaste Judith ( a female version of David and Goliath), is victorious and has been depicted many times as the triumph of virtue overcoming vice, chastity overcoming lust and humility overcoming pride.

With her penchant for painting  powerful women: heroines of immense strength and courage, imbued with a healthy dose of vulnerability, it’s no surprise that she painted four canvases of Judith and Holofernes.

Of all the paintings and sculptures that were created by artists of the era, (including Caravaggio), to me, hers are the most violent, visceral and real.  The graphic violence of Artemisia’s depictions is staggering when compared to the more sanitised versions (except maybe Caravaggio), considering the other artists were all men. 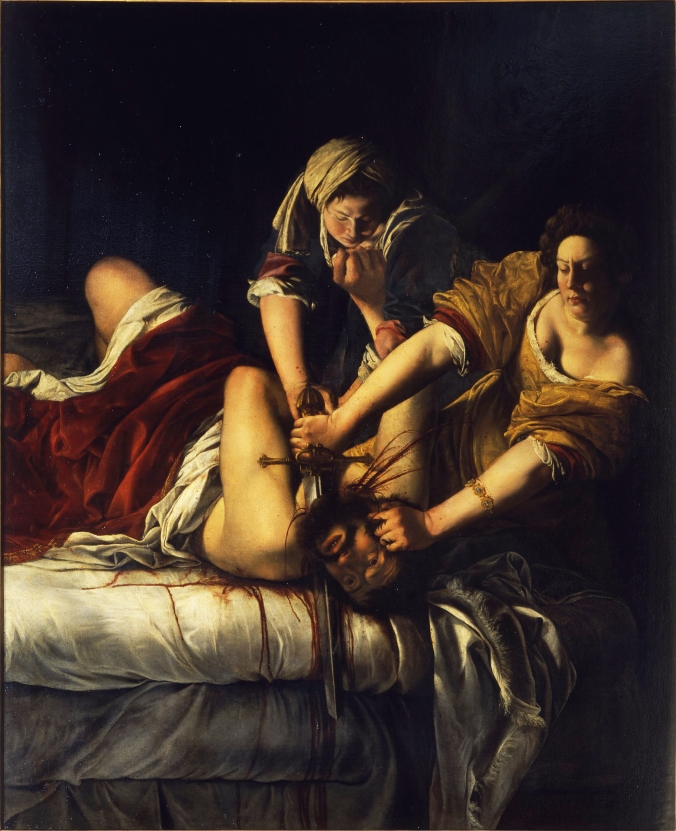 When I look at the Florence painting it shows me rage. Pure, unadulterated rage and it’s horrible to look at. It’s as if she has transferred all her anger towards Agostino Tassi and the suffering she endured from inquisition style torture at the hands of the ‘establishment’, and laid it bare for people to witness hundreds of years after her brush covered the canvas.

It is similar in composition to Caravaggio’s version painted earlier in 1599, but in Caravaggio’s Judith is somewhat detached from her grisly deed, whereas in Artemisia’s paintings she’s putting all her physical effort and force into her unpleasant task. The look on Holofernes’s face (or is it Agostino’s face?) is chilling.  Certainly Judith is a self-portrait of Artemisia.

The injustice she felt and the cruelty she experienced is expressed through her art. Artemisia put herself into her work, and her art speaks to me as a woman.  Art historians might disagree with me, but that’s my humble opinion.

Her earlier painting of Judith Beheading Holofernes (where she is wearing a blue dress) shows the pure horror of her act: there is blood seeping into the mattress and spurting everywhere, but she is determined to kill Holofernes and thus eradicate tyranny. 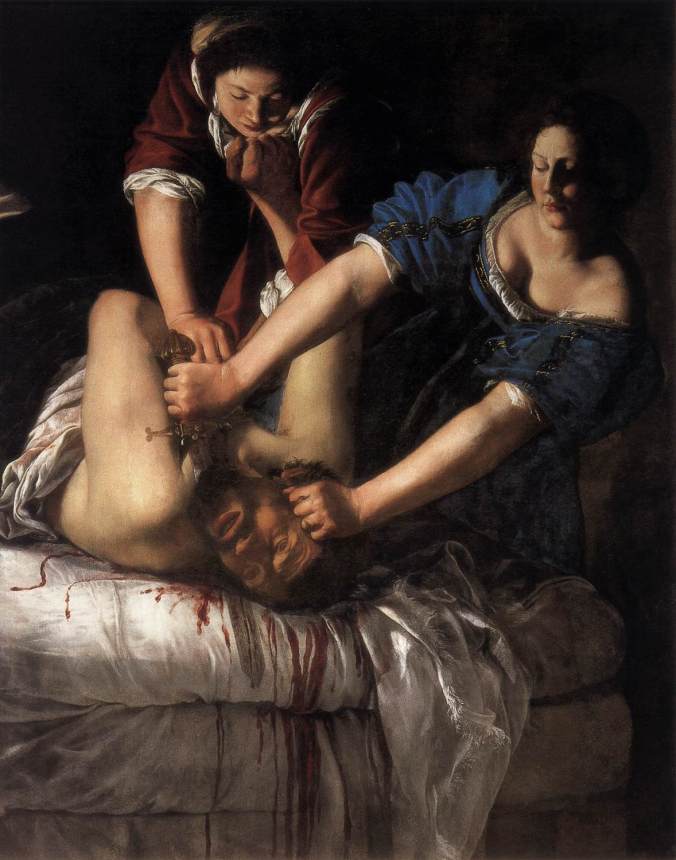 The other two pictures of the aftermath, where the head of Holofernes is being placed in a basket/bag are equally arresting. Again, there are many versions by different artists, and even compared to one by her father, Orazio, Artemisia’s 1625 version (now in the Detroit Institute of Art) has a sense of realism that makes your hairs stand on end.

Judith with the Head of Holofernes c. 1625

The golden silk sheen of Judith’s dress is almost luminescent under the flame, and her skin glows in the candlelight in comparison to the pervading darkness inside the tent. This shade of yellow has been labelled as ‘Artemisia Gold’.

It’s as though, having done her deed, Judith and her maidservant pause as they hear a sound outside the tent. Discovery would have meant certain death, so the two women are momentarily still, not yet able to make their escape. It’s claustrophobic, dramatic and totally brilliant!

Judith and her Maidservant by Artemisia Gentileschi c. 1612-13. Housed in the Pitti Palace, Florence

Here is a selection of her heroines and biblical characters, proving that she didn’t just do gore and slaughter! 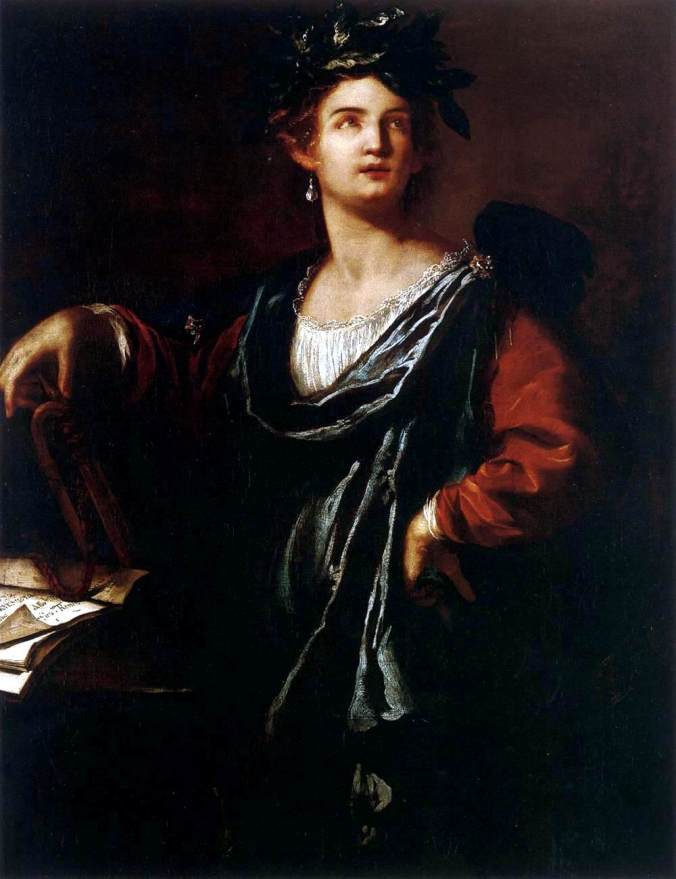 Clio the Muse of History c. 1632 by Artemisia Gentileschi 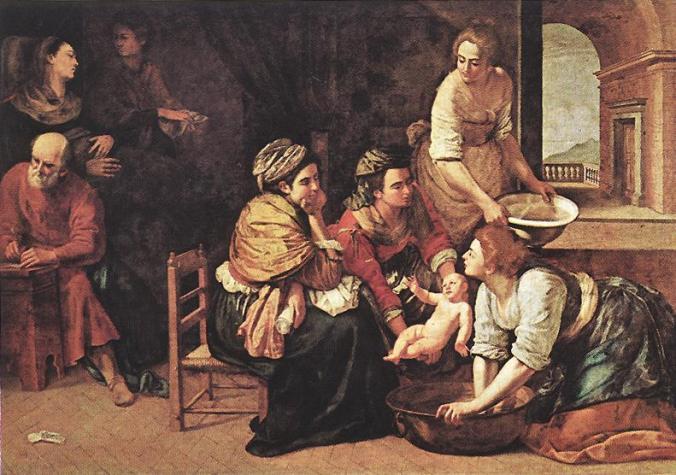 The Birth of St. John the Baptist by Artemisia Gentileschi. Commissioned by Philip IV of Spain 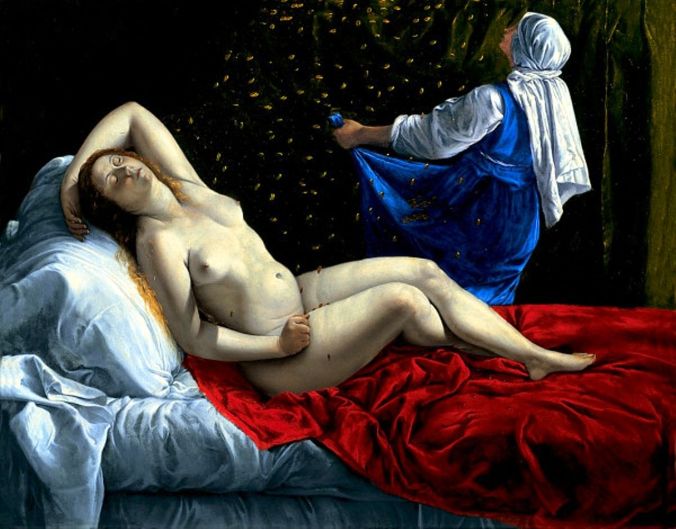 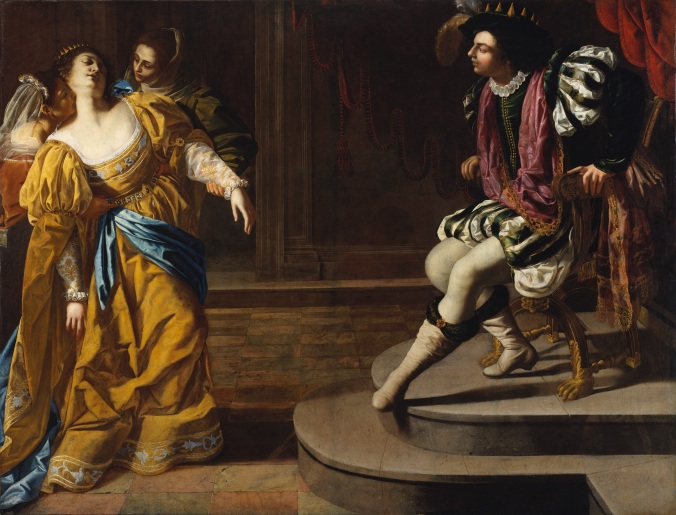 Lot and his Daughters by Artemisia Gentileschi 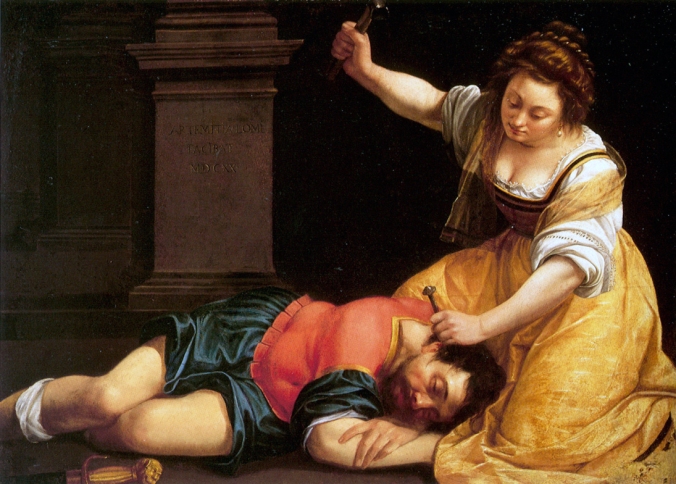 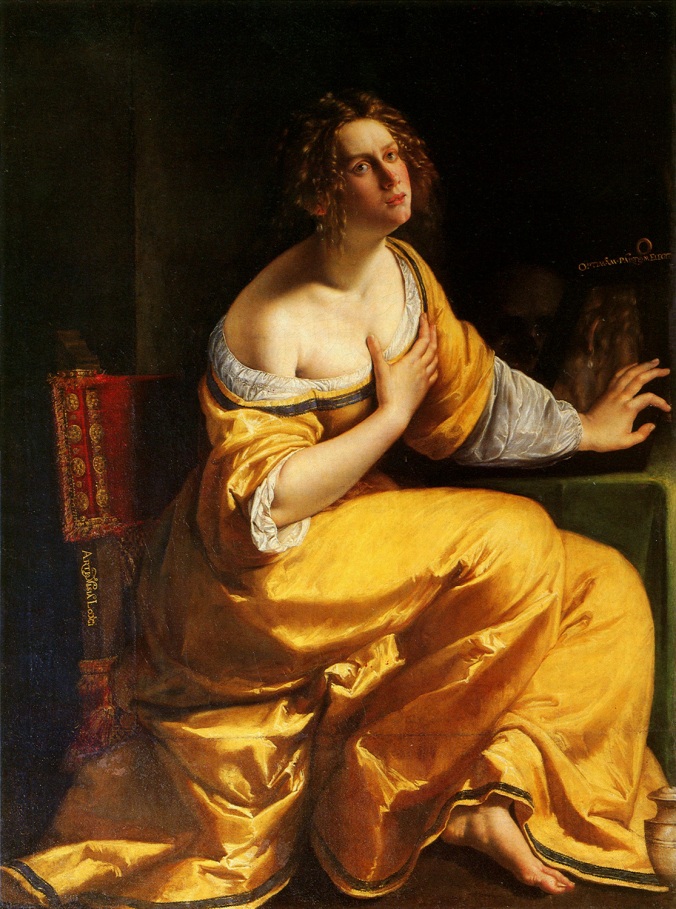 Although there were other notable baroque women painters, I feel it is Artemisia who suffered and struggled the most for her art, who laid down the gauntlet to the male art establishment that said, “I’m as good as any of you.” Art was very much a gentleman’s club in the baroque era, and Artemisia soon discovered that they weren’t all gentlemen either!

She was an artist with an edge, certainly living on it most of the time. Her work has such a robust and natural quality, and perhaps her infamous status after the rape trial set her apart as a bit of a curiosity, freeing her up to create such incredible works without the usual constraints that women of the time lived within.

Her early trauma seems to have been the catalyst for her career. I don’t think she would have made such an impact as an artist without the emotional intensity behind her painting.

She and I would have had quite a bit in common, (centuries, circumstances and talents notwithstanding). Being as I can’t have a conversation with her, the next best thing is to admire her art and study her life. She deserves to be remembered.