One never needs an excuse for a family picnic. As Sunday was my birthday, and rather fortuitously, the sunniest and hottest day of the year to date, we drove to Woodstock and spent a fabulous few hours at Blenheim Palace.

Roughly 25 years have flown by since my first visit and my children have never been, so we decided to explore the vast park and gardens that have been home to the Dukes of Marlborough for 300 years.

“Under the auspices of a munificent sovereign this house was built for John Duke of Marlborough, and his Duchess Sarah, by Sir J Vanbrugh between the years 1705 and 1722, and the Royal Manor of Woodstock, together with a grant of £240,000 towards the building of Blenheim, was given by Her Majesty Queen Anne and confirmed by act of Parliament . . . to the said John Duke of Marlborough and to all his issue male and female lineally descending.”

~ Plaque above the East gate of Blenheim Palace

It was fascinating picking up bits of history through an exhibition in the stables, just off the main front courtyard.

Aerial views of Blenheim in winter:

The Battle of Blenheim

During the War of the Spanish Succession, John Churchill 1st Duke of Marlborough proved to be a canny general and diplomat. England was allied with the Dutch Republic, Austria and the Holy Roman Empire, together forming the Grand Alliance against Louis XIV in his brazen attempt at dynastic rule over Spain and their European territories. 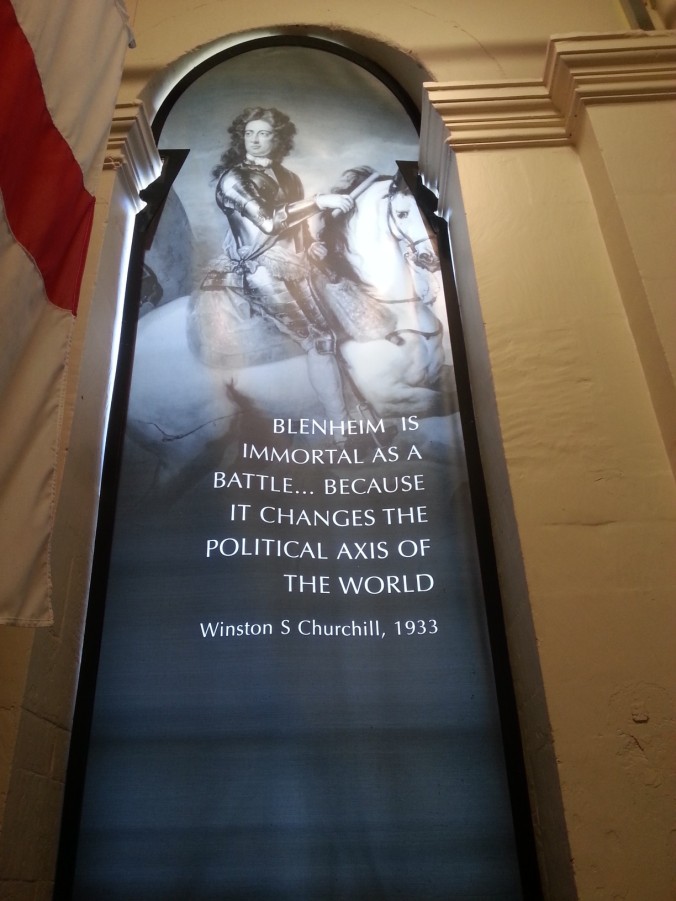 The Battle of Blenheim (fought at Blindheim, Bavaria on 13th August 1704), was won under John’s leadership in alliance with Prince Eugene of Savoy, and was a major turning point in deciding the European balance of power.

Rather than engaging in siege warfare against Marshall Tallard and his French forces, Churchill made a strategic, surprise attack forcing an open battle. It was hard fought and hard won, with many casualties on both sides. 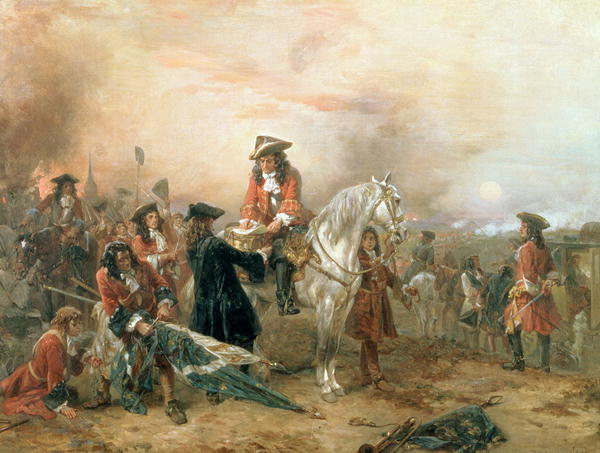 The Duke of Marlborough signing the despatch at Blenheim c. 1704

He won further victories at Ramillies in 1706, in Oudenarde in 1708 and Malplaquet in 1709, elevating and securing his position as one of the most successful and respected generals in Europe. The Battle of Blenheim was such an important turning point for Great Britain and its emergence as a military and political leader in Europe, that the estate in Woodstock was gifted to John and Sarah Churchill by a grateful monarchy.

Despite the glorious victory that preceded and heralded Blenheim’s existence, much acrimony surrounded its construction. Blenheim’s birth was not an easy one!

A major reason for discord between the Duke and Duchess of Marlborough was John’s controversial choice of architect, Sir John Vanbrugh.

Aided by Nicholas Hawksmoor, he designed and built Blenheim Palace in the English Baroque Style. However the duchess, Sarah Churchill, a close confidante of Queen Anne, had wanted to employ Sir Christopher Wren, who was unassailable after St. Paul’s Cathedral. There was constant bickering between the Duchess and Vanbrugh.

The two could not agree about the fate of the existing Woodstock Manor and lodge, which had served as a royal retreat since the time of King Henry I.

Princess Elizabeth, before ascending to the English throne had been held captive in the lodge between 1554 and 1555 by her half-sister and Queen, Mary Tudor. It had lain in ruins after its destruction at the hands of Oliver Cromwell and his Parliamentarians since the Civil War.

Ruby in the perfect climbing tree near our picnic spot.

All but a stone pillar was swept away before construction of Blenheim Palace at the behest of the duchess; against the wishes of Vanbrugh, who had wanted to conserve what remained of the original dwelling.

Political infighting with the Tories and Whig Party and a fall out with Queen Anne sent the Churchill’s into ignominious exile on the continent, only returning after Queen Anne’s death in 1714. They took up residence in the east wing of the then unfinished Blenheim, and found themselves back in favour with the new monarchy, the Hanoverian dynasty.

Charles Spencer-Churchill, 9th Duke of Marlborough first cousin of Winston, inherited his dukedom in 1892 under the shadow of personal and family bankruptcy.

The debts incurred by the extravagant spending habits of George Spencer-Churchill, 5th Duke of Marlborough, which John Winston Spencer Churchill, 7th Duke of Marlborough had not been able to stem, even after selling off many of the family’s heirlooms, forced him into a mercenary and loveless marriage with Consuelo Vanderbilt; the beautiful, young American railroad heiress in 1895. 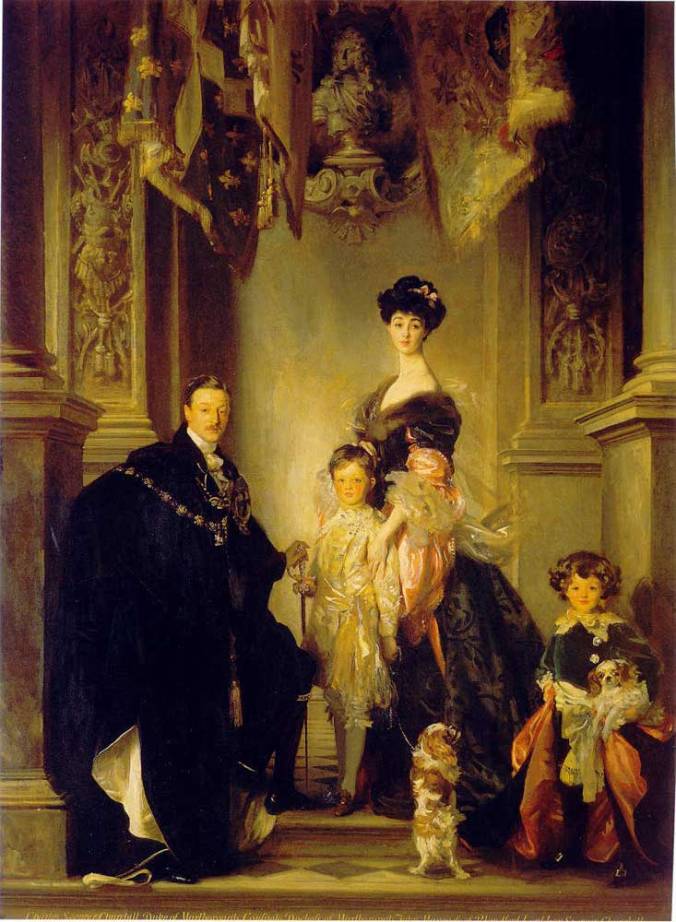 9th Duke of Marlborough with Consuelo and their sons, by John Singer Sargent

New world Vanderbilt money ensured old world Blenheim’s survival, but the Duke and Duchess were unhappy together. They had two sons to carry on the Marlborough line, but separated in 1906 and divorced in 1921, after which Charles had their marriage annulled.

We didn’t go into the house, my daughters made it clear that walking round a stately home would be a fate worse than death; but we did enjoy parts of Blenheim’s formidable 2,000 acres of gardens and grounds.

The Fountain Terraces (complete with sculptures from Bernini’s Italian studio) and lakeside walk are a pleasure to amble through on a sunny afternoon. An ice cream treat doesn’t go amiss either!

Blenheim Palace is unique as a country house in that it is the only non-royal residence (apart from the Church of England’s Lambeth Palace) allowed the status of ‘palace’. Its grandeur had even beguiled Hitler, who instructed that it not be bombed during World War 2, eyeing it as a possible residence should he invade the UK. Fortunately that nightmare scenario did not prevail!

Blenheim Palace was first opened to the public in 1950 and made a UNESCO World Heritage site in 1987.

The estate is now home to the 12th Duke of Marlborough and his family, who in his younger, reckless days was labelled the ‘Black Sheep’ of the family by his estranged father John Spencer-Churchill, 11th Duke of Marlborough, also a cousin of Winston Churchill and given the nickname ‘Sunny’, (but not due to his temperament). Eventually father and wayward eldest son were reconciled.

The millions of visitors each year provide the funds for Blenheim’s onerous upkeep.

Before we departed I wandered over the Grand Bridge built and designed by Sir John Vanbrugh, with the Column of Victory looming before me.  Ruby was very tired and had taken to dragging her feet whilst pulling my arm and wailing intermittently.

She begged me mercilessly to let her roly-poly down the steep hill, but I decided the generous amounts of geese poo and the thought of her rolling straight into the lake prohibited that particular fancy…

The sun was slowly sinking, its fading light reflected as brilliant, squint inducing starbursts off the water, shimmering and glinting at passers-by, illuminating every last drop of Blenheim’s peace and tranquility.

I eventually turned to head back to our picnic spot to search for Emily’s lost bracelet, but took a moment to admire the distant sandy coloured façade and columns of the palace, standing noble and proud to this day. Blenheim will always be an emblem of courage, fortitude and empire that presides over its Capability Brown landscape and beyond.

Blenheim Palace is the legacy of its founding father and his outstanding military achievement, but each generation of its famous chateleins, (the Spencer-Churchill family), have left their mark in the process of preserving Blenheim for future generations – a national treasure with a magnificent, historic heritage.

“At Blenheim I took two very important decisions: to be born and to marry. I am content with the decision I took on both occasions.” ~ Sir Winston Churchill

The temple of Diana, where Winston Churchill rather romantically proposed to Clementine Hozier during a rain storm in 1908. He later wrote: “My most brilliant achievement was my ability to be able to persuade my wife to marry me.”

Bust of Sir Winston Churchill in the WC Memorial Garden

I hope you like my photographs of the grounds and gardens. It’s well worth a visit if you’re ever in the vicinity of Oxford. It will be especially fun for families this Easter weekend. Happy Easter!