Andalucia has many distinctive attributes in summer. First, there’s the heat; unrelenting, oven-like and intense.  Then there’s the sweet, dry scent; that wonderful evocative smell, carried on the breeze, a mingling of salty ocean droplets, lemon groves, pines and dusty mountain air. It’s fuller and headier at night. The Cicadas contribute a constant roar, as millions of wings rub instantaneously providing nature’s soundtrack to accompany the rugged mountain and coastal scenery of the Costa del Sol.

Forest Hills, our home for the week, nestled into the foot of the Sierra de las Nieves at Estepona, and resembled a small Moorish Citadel clinging to the hillside. Our spacious apartment had a lovely large terrace that overlooked the coast on one side, and the mountains on the other. Most days the heat haze obscured the Rock of Gibraltar, but on our last day the wind freshened and changed direction, and we could clearly see the British enclave and the mountains of Morocco across the narrow stretch of the Mediterranean Sea.

The Spanish coast along the The Strait of Gibraltar often gets a battering from strong winds, and the day we visited Cristo Beach a hot dry wind from the Sahara whipped up the sand in our faces.  The two types of winds we experienced are known locally as the easterly Levante and its westerly counterpart, the Poniente.

Quieter and less touristy than neighbouring Marbella, Estepona is a pretty coastal town that boasts a beautiful long beach with an immaculate esplanade and a smart marina with plenty of eateries. On the morning we went sailing it was cool and cloudy (much to our amazement), and as our yacht for the trip, Intrepido, left the harbour (the sails were up but we needed power as the sea was like a millpond), we embarked on our two hour mini-cruise in search of Flipper as we headed towards the hazy horizon.

After a bit of moaning about the cold air and lack of sightings my girls perked up as we were soon visited by a small pod. Imagine our delight as a mother and young one surfaced near the bow. The sound of their exhalations was exhilarating! We were soon joined by about three more inquisitive visitors. The sea was clear and still, we could see them darting under the front of the yacht, the light reflecting off their silvery skin just beneath the surface of the water.

I took hundreds of pictures, but they were so fast (even when jumping out of the water), that by the time my camera had clicked there was just a ruffled patch of water showing on my screen. Luckily I had two decent pictures to show for my efforts. Throughout the encounter Emily and Ruby were ecstatic. It was a very special environment in which to see these playful and lithe creatures. The skipper let the girls have a go at steering too, it was so sweet to see them showing him their right from left, but they didn’t quite progress onto port and starboard… 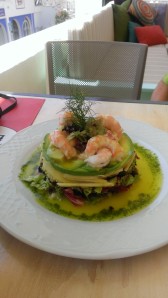 Afterwards we had lunch at La Pintoresca. Located at Pantalan 5 on the Marina, just behind the Real Club Nautico building, it’s a delightful tapas restaurant run by the friendly and welcoming Jacob. Nothing was too much trouble, and he served us fresh, mouth-watering delights that made for a memorable meal. The small swallows in the palm tree by the balcony watched us intently and the occasional boat left the harbour. If you are ever in the area I can thoroughly recommend his establishment. Even my daughter Emily who has been known to be a tad fussy was raving about the food we ate!

Some days are special. Friday 1st August was one such day for us. We are normally game for an adventure, and Monte Aventura certainly made sure we had one in the stunning limestone mountain range of the Sierra de las Nieves. I wanted the girls to see the real Spain, and an ecotour seemed the best way to do it.

We were collected (along with another family also staying at the same complex) by 4×4 Land Rover driven by our eager and enthusiastic guide, Hugo. He established an instant rapport with the girls and his English was superb. He was very personable, and what he didn’t know about the ecology of the area wasn’t worth knowing. We drove to Marbella, and on our way into the mountains we passed the UAE Royal Family’s Spanish summer residence. Bougainvillea adorned walls and we looked up to the peak of La Concha above us. 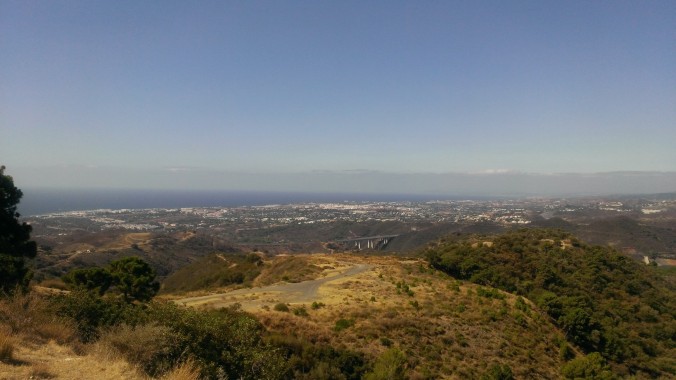 Once off-road we were able to stand and hold onto the roll bars whilst Hugo encouraged us all to push! As we entered the UNESCO Biosphere Reserve of the Sierra de Las Nieves Hugo pulled out some local fauna for us to inspect and we discussed the attributes of these native plants. Fresh fennel, thyme, rosemary, mint, and other plants were examined and Hugo explained about the local grass, esparto. Think Espadrills! It has many uses and is known for its toughness and durability. Hugo showed us the esparto made slings that local shepherds used to herd their goats in the area, and we each had a go at flinging stones into a disused quarry. It was great fun; and once the technique is mastered the stones can travel for miles it seems. It was the only time I have let Emily and Ruby anywhere near such apparatus!

We looked down towards the Presa de la Concepcion, a 7km long dam and reservoir built in 1971.  Due to a drier than normal winter last year Hugo explained that it was only fifty percent full and thus causing concern for the remainder of their hot dry summer.  After a group photo we left the coast behind us and tackled the hairpin roads of the Nature Park. Hugo told us about the varied fauna of the area, we saw olive groves, pines, almond trees, cactus leaves and flowers, and the African originating carob Trees. Planted by the Arabs many centuries ago they have thrived, their fruit being a popular source of food for local animals and people alike. The Arabs developed a measurement system using the seeds, now known today as the same weight system for evaluating gems – the carat.

Soon we approached the medieval fortress of Istan (meaning high place). The ‘White Village’ was built by the Moors in the 15th Century due to its natural spring, and their original aqueduct is still in use to this day. Hugo parked the Land Rover at the source of the spring for us all to have a drink and cool off, and proceeded to show my girls giant tadpoles, butterflies and even dragonflies that were buzzing around us. 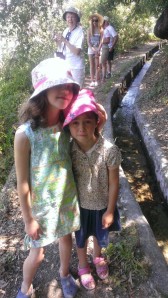 We walked down by the concrete gullies (built around the ancient irrigation system) picking blackberries as we went. We saw oranges, avocados and pomegranates growing in the hill beside the path. Our first panoramic view of Istan greeted us along this pathway. We then met Juan, a 91 year old local resident (and quite a character), who greeted us with fresh tomatoes marinated in olive oil, red wine vinegar and salt, fresh bread and oranges and a mixture of local wines which we drank from the pouch in the appropriate manner: held at arm’s length squirting into ones mouth! He showed us his workmanship with esparto and then came with us to the town square fronted by the ancient mosque turned church, where we had a delicious lunch.

Afterwards we headed further into the mountains and through the indigenous Cork Tree forest, where mature trees (50 years plus) are harvested for their special bark. Hugo showed us a cross section of a sample, with the lines indicating the age of that piece of natural cork. The trees regenerate after about a year, but are not then harvested for at least another ten years. Cork has a porous quality that makes it perfect for letting wines breathe, and the many other uses that man has found for it in bathrooms and kitchens. We learnt that the Cork Tree is impervious to fire, and is well suited to the dry and arid summer landscape where frequent bush fires can occur. They will survive these blazes as long as they have not been recently harvested.

Twenty minutes of dusty off-road driving later, and we were rewarded with our final destination of the day: a fresh water pool replete with waterfall which was home to turtles and other small fish. For mum, me and the girls this was the highlight of our trip. We all clambered over the smooth rocks that lead to the pool listening to the sound of the water tumbling from the rocks high above. Our dip was totally refreshing and magical. The girls stayed in the shallows with mum as I swam down the deeper, narrow gorge to the waterfall, and leant against the rock behind its pristine effluent stream.  I’ll never forget the sensation of the droplets hitting my sun parched face.  We spent about twenty minutes enjoying the cooling effect of its clean, clear water and then climbed back out and into our Land Rover ready to travel back.

Ruby was just about old enough to enjoy the trip we did, but it wouldn’t be suitable for kids under 5 years. Hugo has a passion for his country and the local ecology that really shines through. He often told us interesting facts about the wildlife of the mountains, especially the goats and wild boar; and was very adept at spotting eagles soaring and diving around us. He really made the day enjoyable for all of us, and I’m certain the family we were with had a great time also.

My girls trying their hand at Karaoke.

View towards the Strait of Gibraltar from our balcony

Mountain view from our balcony

My little munchkins at Estepona Marina

Ruby feeling a little chilly on our quest for dolphin sightings.

Dolphins diving under the yacht

Mummy and Ruby relaxing on the way back to the harbour

Emily having a go as skipper

Hugo showing Ruby how to use the esparto sling

Entrance to the Nature Park

Just had a drink from the main fresh water

Stunning view of Istan from the aqueduct pathway

Emily posing at the airport!