“Music…can name the unnameable and communicate the unknowable.” ~ Leonard Bernstein

As a child, opening up the music cupboard at school should be a magical moment, but for many primary school children it’s a case of no instruments and no budget; a stark reality that threatens our social and cultural heritage for years to come. 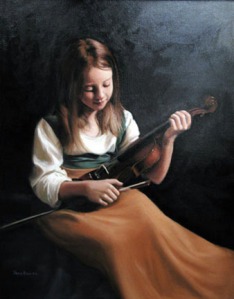 I became an amateur violinist thanks to the good fortune of being given free (yes, you read that correctly), free violin lessons at the age of eleven. I was only interested in playing the violin because my best friend at the time was learning it. After about three lessons she dropped out, but I stuck at it. When I left primary school, I continued to have private lessons (thanks to my parents) with Lillian Ing, (a virtuoso in her heyday) for the next five years until she sadly passed away.

In those hours of mostly forced practice, of scraping away at scales and etudes, studying for grades, and being told rather facetiously, “Can’t you play over the hills and far away?” I reached a point of competency.  I took pride in mastering each new piece.

I didn’t understand back then quite how much I would come to love and appreciate my moments on the violin; not just in terms of taking me outside of my ordinary life, but in the satisfaction of applying myself to an instrument that constantly stretches my mind and physical ability.

When I started college and later after I moved to London, I joined two amateur orchestras: the Aylesbury Orchestral Society and the Wandsworth Symphony Orchestra respectively. This was a wonderful experience for my development as a musician as well as a fun social interaction.

Music runs in our family. My mother was a pianist and sang as a soprano in a choir, and she told me that she played Beethoven’s Moonlight sonata and Chopin nocturnes when she was pregnant with me.  I’m sure that’s why the Moonlight sonata in particular always evokes such peace in me, as well as my adoration of Beethoven’s and Chopin’s music full stop.

My daughters’ paternal great grandfather was a pianist, composer and conductor. He was conductor of the Ipswich Orchestral Society from 1948 until 1953, and his successor was none other than Colin Davis, who wasn’t yet a Sir, and who later became principle conductor of the London Symphony Orchestra from 1995 until 2006, when he was then made president. After leaving Ipswich Peter went on tour for a few years to countries like Malaysia, Singapore, Australia, Africa, New Zealand and Jamaica, (where he lived with his family from 1961-63, and founded the Jamaican School of Music). His life was so interesting and inspirational it’s worthy of a separate post.

I played my violin regularly when I was pregnant with three of my children.  I don’t know if it’s had an effect, but they all seem to like classical music.  Emily briefly had piano lessons but she appeared to lose interest (and I ran out of funds), while more recently Ruby has been observing me practising and asked if she can learn the violin.

I’m delighted by this, but also slightly concerned about the cost of buying an instrument and tuition.  I considered teaching her myself, but that would be doing her a disservice as I’ve almost certainly fallen into bad habits in the many years since I last had lessons.

It’s a national disgrace that my children’s generation do not have the same musical opportunities that I did, the result being, according to the Making Music report published by the Associated Board of the Royal Schools of Music, that there has been a 35 percent decrease over the last 15 years in the number of children aged 5-14 who know how to play a musical instrument.

Music is not a priority in primary school education, despite conclusive research that indicates its positive impact on self-esteem, focus, literacy, numeracy and overall wellbeing. Even primary schools with good or outstanding OFSTED reports may not have funding for any type of musical education. Clearly the government pledge to tackle the ‘musical divide’ is showing no evidence of implementation at grassroots level.

The starting point should be for all primary schools to have a decent selection of musical instruments for children to try, and access to basic lessons where they can discover if they have an aptitude and love of music making.

At present, the study of music in a child’s formative years is an elitist undertaking. Parents want the best for their children, but those living in poverty are being discriminated against. Who knows what talent lies dormant in deprived areas of our inner cities? Perhaps music will prove to be the medium that keeps some youngsters out of gangs?

We cannot afford to neglect this most beautiful, skilled and uplifting pursuit, which can improve the lives of the students as well as the numerous souls their vocation will affect; whether it be in composing, performing or teaching.

I’m not the only one who thinks this. Richard Gill in his TEDX Sydney presentation talks about the value of music education:

I admire musicians like violinist Nicola Benedetti who has spoken out about the state of music teaching in Britain, and also pianist James Rhodes for his Don’t Stop The Music campaign.

You can see how he got on with St. Teresa’s Primary School in the Channel 4 two-part documentary.

Why should the arts be the first thing to suffer in a climate of austerity? Why is it considered dispensable? Nourishment for the soul is what sustains us all.

Closer to home it looks like my daughters will be getting a half size guitar and three-quarter size violin for Christmas!

5 thoughts on “The Importance of a Musical Education”