“This has always been a man’s world, and none of the reasons that have been offered in explanation have seemed adequate.” ~ Simone de Beauvoir

One of my favourite songs is It’s a Man’s World by James Brown. I loved his voice, vibe and vitality. The melody is tuneful and catchy, almost addictive; but the lyrics are pure genius. I’m sure you know the song well, but why not have another listen? I love this duet version with opera supremo Luciano Pavarotti:

By virtue of their experience most women will agree it’s still a man’s world. The irony is that it can only ultimately be propagated and populated by women. If we weren’t willing to, or couldn’t bear children it would threaten the survival of our species, (cue the brilliant novel by P.D. James, The Children of Men).

A mother is the most vital person in a baby’s early life, the source of food, love, security, comfort and care. She is indispensable. Her femininity is integral to life. But before she’s a mother she’s a woman.

Women have struggled against repression from the dawn of time to the present day, (with exceptions of course), having been subjected to rules and conditions that were imposed by religion and men who felt threatened by feminine power. 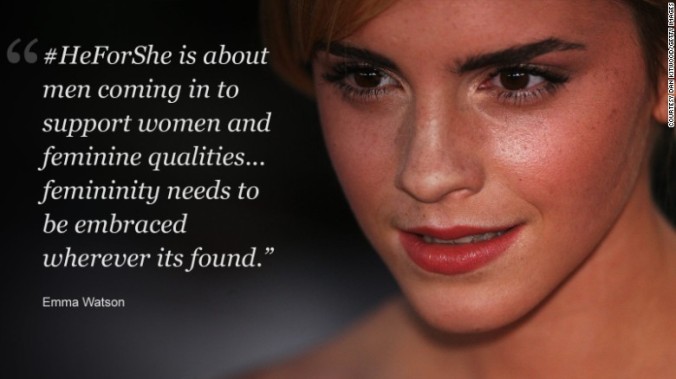 Our human rights have been trampled over in the most appalling ways. In many parts of the world women continue to be treated like second class citizens, deprived of education, used as sex slaves, domestic slaves; not permitted to show their faces and made to walk behind a man.

In Victorian Britain women were not allowed to vote, spawning the rise of the Suffragette Movement, spearheaded by heroines such as Emily Pankhurst. She was no less feminine for her bravery, sacrifice and cause.

Women and girls have been given away in marriage by their parents without a say in a commitment that will affect the rest of their lives and future happiness. Even worse, some have been murdered for daring to love the man they want instead of a man that has been ‘chosen’ for them.

Femininity is about respect for life in all its forms.  It is not about manipulation and control.

Unlike the cruel, ego led males that have trafficked young, vulnerable women and condemned them to a life of prostitution so that their pimps can rob them of all dignity and freedom and live off of their subjugation. It’s sickening. If women rise and live in their power these types of situations will become less prevalent.

I so admire the work of Angelina Jolie with the United Nations in standing up for Women’s rights. She has achieved her success by embracing her own feminine power.

In many parts of the world girls are denied an education in an attempt to keep feminine power from manifesting. That is why the Nobel Peace Prize Laureate Malala Yousafzai is such an important role model for young girls across the globe. Her courage, intelligence, determination and humanity have thwarted hatred, ignorance and fear.

An educated woman is a force for good in the world.

In the West, where women mostly have the luxury of equal rights (and in some cases equal pay), we still fight against injustice, prejudice and sexism in corporate life as well as mainstream media. The plethora of sexualised images of women on posters, magazines, TV and films contribute subliminally to the feeling of inadequacy that many of us (who weren’t blessed with supermodel looks) feel about our bodies. In my case after having children.

We end up comparing our imperfections against the perfect ‘retouched’ glossy photos where hair and makeup have been professionally applied so it’s never a fair contest. It should never be a contest, but it’s hard not to feel inferior when we are constantly bombarded with images of nubile goddesses in their prime versus our post motherhood forms. 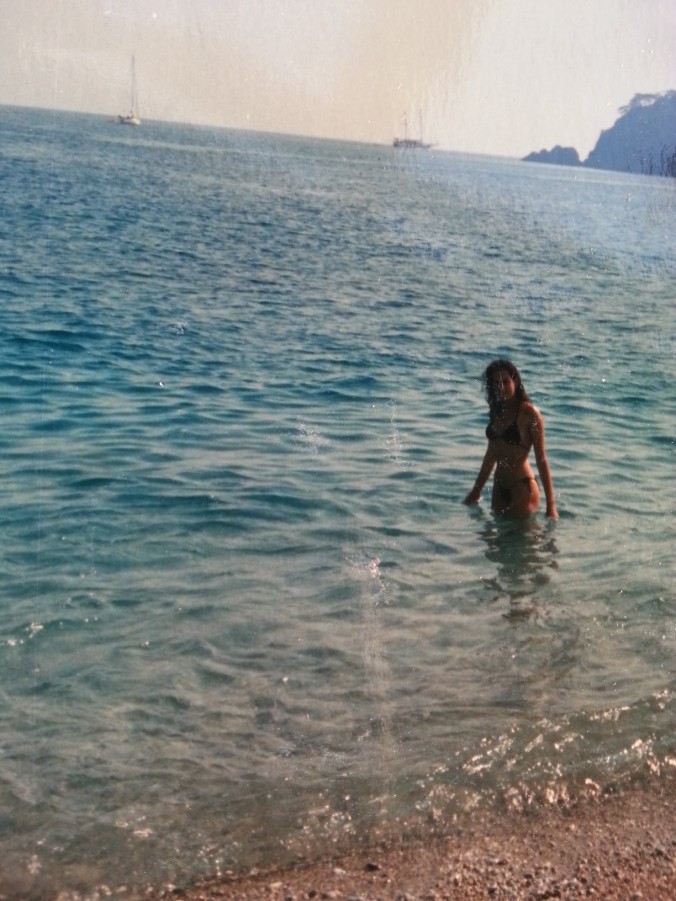 Yours truly on holiday in Turkey in 1989. It reminds me of my ‘free spirit’.

Sometimes it’s fun to be reminded of our prime! We remember that youthful part of us is still part and parcel of our more mature selves.

A siren has an air of mystery; she is alluring and confident in her own skin. It’s not about sexual domination, but about being in tune with her abundant sexual energy. Perhaps, mistakenly, we think that men will only notice us if we flash the flesh, wear red lipstick, walk in high heels and brandish our ‘assets’ in plunging necklines. I’ve done it occasionally myself. But I firmly believe there’s more to femininity than appearance. 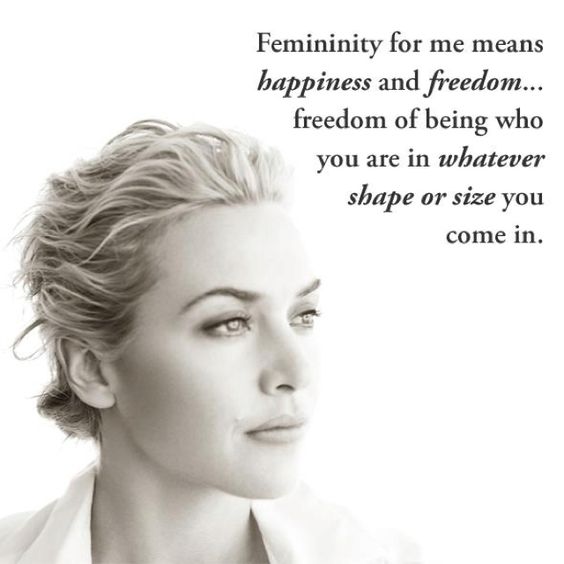 By all means we should make the best of ourselves. I’m not saying there’s anything wrong with that if makes you feel good and it’s done with self respect. True sexiness comes from embracing our innate femininity and personal power. It’s feeling content with who we are, happy in our own skin (even if it does bear the stretch marks of motherhood).

It’s about making the best of our appearance for our own self-esteem and not always pandering to the preferences of men. It’s about embracing our ‘inner goddess’ by knowing that we are beautiful on the inside and on the outside.

Understanding our strengths and representing our unique virtues and values in the world is the ultimate expression of our divine femininity.

noun: the quality of being female; womanliness.

“she celebrates her femininity by wearing make-up and high heels”

“she had always delighted in her femininity”

You are smart, sexy, intelligent, kind, empathetic, intuitive, tender and strong just as you are. Women can thrive in a man’s world by being true to who we are. A woman who loves and respects herself first and foremost will be a valuable partner in any relationship. She’s not clingy and insecure, but rather in touch with her own emotions and therefore more likely to be in tune with those of her partner.

Dancing and movement is a wonderful, grounded way to express and manifest feminine energy. Ilaria Masini illustrates my point perfectly with her contemporary ballet performance to Händel’s Sarabande:

Battle of the sexes

Any kind of repression and curbing of freedoms will elicit a backlash, otherwise there would have been no need for the feminist movement. It’s understandable that women have developed more traditionally ‘masculine’ qualities in order to tough it out in a man’s world or a challenging environment. But we must return to our true nature. 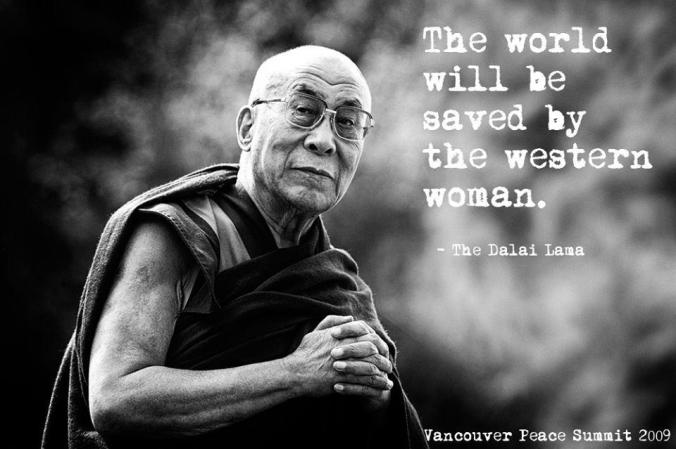 I view it as not being a question of competition but of collaboration. A woman is meant to complete a man, not finish him off! There’s such beauty and symmetry in Yin and Yang.

We’ve all seen and met a woman in business who dresses in trouser suits and acts like a hard bitch or a ‘femme fatale’ because she thinks she has to emulate a man to succeed. She betrays her feminine side in order to be accepted as one of the lads.  Deep down they will not respect her for it, they will feel threatened.

Women don’t need acceptance from anyone but themselves.

The interactions between men and women are most harmonious when both have an equal balance of their ‘anima’ (feminine principle) and ‘animus’ (masculine principle). I’ll be covering more of Jung’s work on this fascinating subject in a later post. 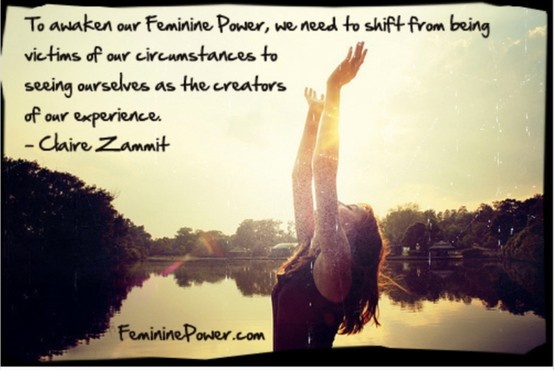 Embracing our femininity is entwined with accepting and asserting our personal power and realising our God-given talents. We can achieve anything we set our minds to.

“On the day when it will be possible for woman to love not in her weakness but in her strength, not to escape herself but to find herself, not to abase herself but to assert herself–on that day love will become for her, as for man, a source of life and not of mortal danger.” ~ Simone de Beauvoir

The qualities of femininity as I see it means expressing ourselves in whatever mode we choose. We can be nurturers, achievers, thinkers, lovers or whatever we desire. It will change depending on what stage of life we’re at. Many of us with children are multi-tasking for our lives. 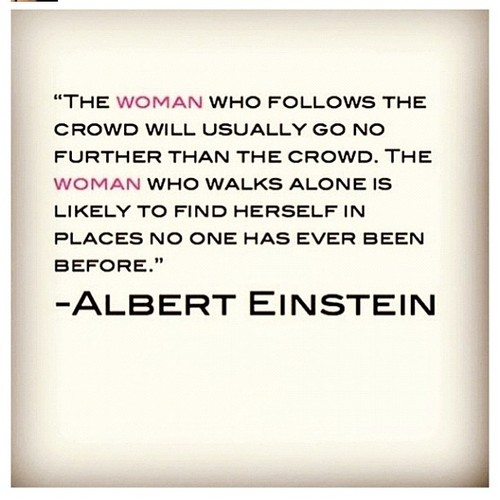 There have been a few times when I’ve had to unleash Kali in order to survive. But I locked her away again after she had accomplished her purpose. Otherwise I would have been eaten up by anger, bitterness and revenge. Nowadays I like to call on Isis, Venus, Aphrodite and Athena, depending on the circumstances!

Be a communicator, be savvy, be strong, be vulnerable, be a damsel in distress if it serves you. Be sexy, be passionate, be sensual, be exhilarated, be interested, be inspired, be lazy, be active, be funny, be playful, be sad, be brave, be scared, be emotional, be detached, be connected, be selfish, be kind, be giving and loving, be protective, be daring, be sporty, be adventurous! Don’t become stuck. Follow your heart! Your dreams matter.

Embrace the whole darn lot! It’s time we claimed an equal share in the sense of entitlement that men often display. 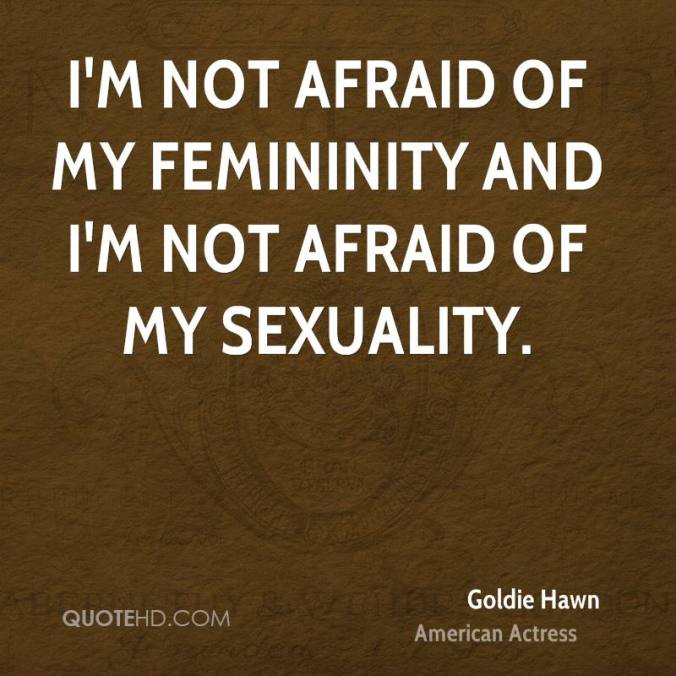 Don’t get me wrong, there are plenty of times when a feisty female, (me included) wants to be held, loved and protected, wrapped in a man’s strong arms; cherished and desired. Sexual union can be just as important to women as it is to men. There are moments when women may equally want to take the lead and initiate all sorts of activities, including lovemaking.

“No-one is more arrogant toward women, more aggressive or scornful, than the man who is anxious about his virility.” ~ Simone de Beauvoir

By being authentically feminine we give men permission to be manly and masculine, but not in a stereotypical way. However, what you do behind closed doors is your business… I don’t know why, but a picture of Tarzan and Jane popped into my mind just then…

I love this candid talk about feminine energy and power by Candice Oneida:

To truly be a woman in a man’s world is both liberating and exciting.  When we accept our ‘inner heroine’ we can admire and value the ‘inner hero’ of men. Embracing our femininity doesn’t make us weak, it makes us powerful.

Until the next time, yours in feminine power…Ginny