With so much violence being perpetrated in Syria, across the Middle East and in pockets around the world, it seems timely to revisit a powerful anti-war artwork by one of history’s greatest artists – the Flemish Baroque painter Peter Paul Rubens.

Rubens’ visceral and heart-stopping visual depiction of the biblical story about the slaughter of the firstborn male babies in Bethlehem fills me with horror. It’s almost as if the heinous, frenzied energy portrayed within the lifelike pigments on the canvas spill out onto the viewer. It’s impossible to remain passive and calm while looking at Massacre of the Innocents. 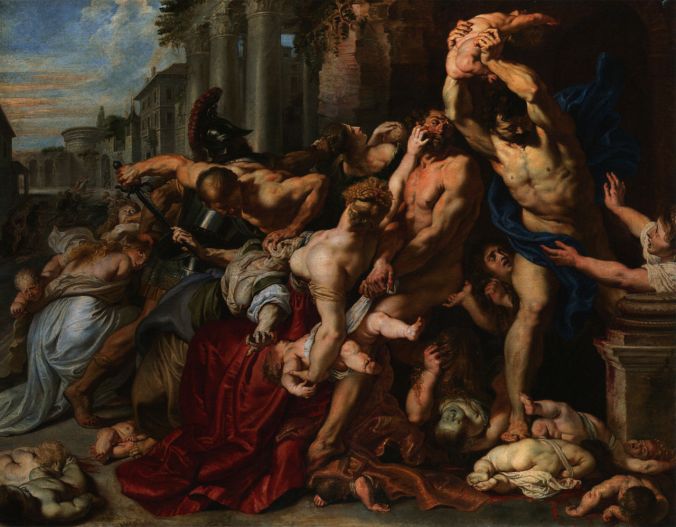 The Massacre of the Innocents now hangs as the pièce de résistance  in the Art Gallery of Ontario, to whom it was donated by Kenneth Thomson; a generous gift to the people of Toronto. After its initial time hanging in the National Gallery, (side by side once again with the painting that preceded it, Samson and Delilah) it was sent to its permanent home in Toronto in 2008. I wished I had seen it while it was in London…

The Massacre of the innocents was the first of two works on the biblical subject painted by Rubens, commencing in 1611 just three years after his return to Antwerp from an eight year stint in Renaissance Italy.

Alongside Rubens’ earlier masterpiece, Samson and Delilah, the Forchondt Brothers sold the works to a patron of the arts and an avid Rubens collector, Hans-Adam, the Prince of Liechtenstein in around 1700. The paintings remained in the Liechtenstein family collection for two centuries, and at one point were hung together in the Garden Palace in Vienna.

The first misattribution occurred in 1767, when the Massacre of the Innocents was categorised by Vincenzio Fanti as a Franciscus de Neve (II) and the second mistake happened in 1780 when it was catalogued as being by Jan van den Hoecke, one of Rubens’ assistants. The painting was subsequently sold to an Austrian family in 1920, and then loaned in 1923 to Reichersberg Abbey, a monastery of Augustinian canons in northern Austria.

When the Massacre of the Innocents came up for sale it was brought to the attention of Sotheby’s and the National Gallery in London where David Jaffé helped to identify the work as a Rubens.

He compared it with Samson and Delilah (already hanging in the National Gallery) and recognised the artist’s distinctive style and artistic ‘handwriting’ immediately.

It strikes me as more than co-incidence that these two works by Rubens have crossed paths multiple times throughout their history!

Once the Massacre of the Innocents had been attributed to an Old Master its perceived value increased exponentially.  It was the most expensive painting ever sold in the UK and Europe when  the hammer crashed down with the winning bid at a thrilling Sotheby’s auction in 2002.

The purchaser was the Canadian billionaire and art enthusiast Kenneth Thomson, who stumped up the eye-watering amount of £49.5 million; a world record for an Old Master. It’s in the top ten of the world’s most expensive paintings. No painting has reached more at auction in the UK and Europe to this day.

On 1st March 2017, Gustav Klimt’s ‘Bauerngarten’ painting was sold by Sotheby’s in London for a record price of £47,971,250 ($59,321,248), making it the second highest painting in British and European history after Rubens’ Massacre of the Innocents.

However, if one includes sculptures as works of art, they were both eclipsed in 2010 when Alberto Giacometti’s life size Walking Man was sold for £65 million by Sotheby’s.

Previous to the sale of Massacre of the Innocents only two other paintings fetched more at auction: Van Gogh’s Portrait of Dr Gachet at $82.5 million in 1990 and Renoir’s Au Moulin de la Galette, which fetched $78.1 million in the same year, both in New York.

Rubens grew up in the aftermath of violence and war, as a protestant led rebellion was crushed when his home city of Antwerp was laid to waste by the Spanish on 4th November 1576 during the Eighty Years War. This brilliant article by Jonathon Jones in The Guardian gives an insight into the life and times of Peter Paul Rubens and his social commentary on violence and war via his art, and in particular, his epic painting of the Massacre of the Innocents.

The genius of the Massacre of the Innocents

When you get over the sheer revulsion of the subject matter – it’s not easy to look at infants being slaughtered, or the anguish on mothers’ faces as they desperately try to save their sons from the cruel attack of Herod’s soldiers – you can appreciate the skill of Rubens in creating a scene of pure drama, of the wretched bodies trapped in time, in their epic struggle for survival.

The impressive blend of shades of light and dark epitomise the influence of Caravaggio imbued from his travels in Italy.

The luminous and deathly grey skin tones, the rippling muscles, the terror on the faces, the contortion of bodies in a confined space make for a powerful painting. It’s not glorifying violence, it’s condemning it.  Rubens fought against warmongering with his paint brush, (it’s not just the pen that is mightier than the sword).

My eyes are drawn to the central figure, the young, fair haired mother with her back turned to us and being pushed downwards by an older woman about to be run-through by a soldier. She is grasping her baby in her left hand, shielding him beneath her fleshy, alabaster shoulder, whilst her right hand reaches up to claw and gouge the face of the soldier who is grabbing at her son’s loin cloth. The silky, deep crimson skirt has a sombre sheen, as if it is meant to represent their spilled blood.

Above and behind them, orange streaks across the sky and a ruined, classical city provide the back drop for one of art and history’s unspeakable deeds. Rubens has a way of making spectators become involved in his paintings, his visual storytelling.

David Jaffé on The Massacre of the Innocents by Peter Paul Rubens:

Perhaps the outrage evoked by this 406 year old painting should be seared onto the minds and hearts of politicians all over the world.  Innocents are still being massacred and exploited in one way or another. Maybe that will never change; human nature has shown us repeatedly that we are slow to learn from the lessons of history.

“There may be times when we are powerless to prevent injustice, but there must never be a time when we fail to protest.” ~ Eli Wiesel

Born as one of three children to Jan Rubens and Maria Pypelincks, Rubens was well educated as a humanist scholar, familiar with Latin and classical literature. He remained a devout Roman Catholic throughout his life. He began painting at age 14, and studied under two leading late Mannerist artists of the time, Adam van Noort and Otto van Veen.

Sir Peter Paul Rubens was not only a prodigious painter (with around 1400 works of art to his name), but a scholar, diplomat and businessman. He was knighted by both Philip IV of Spain and Charles 1 of England.

His works were mostly religious and historical in subject; usually bold, ebullient and colourful, with a classical aesthetic for muscular, full-figured human anatomy and reverence to a more natural, realistic way of portraying people, places and scripture, that defined Flemish Baroque art.

The artist and his first wife, Isabella Brandt – The Honeysuckle Bower by Peter Paul Rubens c. 1609

During his years of study in Italy, Rubens drew many statues and sculptures from antiquity and learnt the techniques of High Renaissance painters from Venice such as Giorgione and in particular, Titian, who he revered especially for his use of colour; as well as the towering figures of Raphael, da Vinci and Michelangelo in Rome.

He also embraced the edgier Baroque artists such as Carracci and Caravaggio and reflected each of their styles in his unique body of work as he became established in his own right in Antwerp. He fused these iconic influences into his own unique perspective, and is probably considered to be the greatest painter of the Dutch Masters.

I’ll sign off with a short documentary by Andrew Graham Dixon which gives a fascinating insight into the genius of this extraordinary man:

“My talent is such that no undertaking, however vast in size… has ever surpassed my courage.” ~ Peter Paul Rubens