“A dream picture: it must produce such a stillness that one would be awed by a knock on the door.” ~ Arnold Böcklin

As our collective fascination with death prevails at this time of year, my thoughts drifted to Rachmaninoff’s evocative symphonic poem, The Isle of the Dead, completed in early 1909.

This haunting music was composed after Rachmaninoff had seen a black and white reproduction of the painting Isle of the Dead, exhibited in Paris two years earlier.

Black and White Photograph of Version 4

The original and subsequent versions of the Isle of the Dead paintings were created in colour by the romantic Swiss artist, Arnold Böcklin (1827–1901).

Between 1880 and 1886 he painted a total of five versions of his iconic Isle of the Dead. The original painting was commissioned by his patron, Alexander Günther which was spotted half-finished, sitting on an easel in his Florence studio by German widow Maria Berna. This is often referred to as the Basel version.

Isle of the Dead by Arnold Böcklin c. 1880 (Basel Version)

She persuaded him to add the female figure and the draped coffin to the solitary rowing boat in memory of her deceased husband. Maria’s painting (version two) was a smaller painting (29 x 48 inches) of oil on wood, which now hangs in the Metropolitan Museum in New York.

Böcklin must have admired Maria’s idea as he then also added the figure and coffin to his original painting. These first two paintings were titled Die Gräberinsel (Tomb Island) by Böcklin. The enduring ‘Isle of the Dead’ name that all the versions now go by was suggested by art dealer Fritz Gurlitt in 1883.

Painting number three was done in 1883 for Böcklin’s dealer Fritz Gurlitt. Beginning with this version, one of the burial chambers in the rocks on the right bears Böcklin’s own initials: A.B. The painting was sold in 1933 when it was acquired by Adolf Hitler, where it hung in the Berghof in Obersalzberg. After 1940 it was moved to the New Reich Chancellery in Berlin. Its less contentious home these days is in the Alte Nationalgalerie, Berlin. 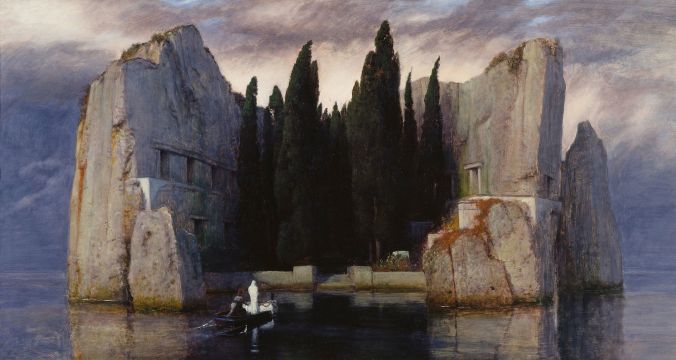 Version number four, (upon which Rachmaninoff’s music is based), was created in 1884 due to financial pressures, and was bought by art collector Baron Heinrich Thyssen. Luckily a black and white photograph was taken of the painting before it was destroyed by fire during World War II.

Rachmaninoff eventually got to see the fifth and final colour version (painted in 1886) at the museum of fine Arts in Leipzig. He commented that he much preferred the earlier black and white version and that he would not have been inspired to compose his opus 29 had he seen the colour version first instead.

“When it came, how it began—how can I say? It came up within me, was entertained, written down.” ~ Sergei Rachmaninoff referring to his orchestral opus 29 in A minor, Isle of the Dead.

It has been proposed that the Greek islet of Pontikonisi near Corfu, with its Byzantine chapel and Cypress trees was the main inspiration for the painting, along with the high volcanic walls of Strombolicchio. Also the English Cemetery in Florence, where Böcklin’s infant daughter was buried served as the location for the painting of the first three versions. Another suggestion is St. George’s Island in the Bay of Kotor, Montenegro.

Overview of the music by Phillip Huscher for the Chicago Symphony Orchestra :

Rachmaninov begins with the irregular movement of oars in the water. (Mahler’s Seventh Symphony, completed just four years earlier, also begins with the stroke of oars on a lake.) The opening is dark—just low strings, with timpani and harp at first—and mysterious. For a very long time, we move forward with little sense of destination, but with a growing urgency. (Tantalizing melodic fragments appear from time to time, like glimpses through the mist, and a haunting high violin theme takes wing at one point.)

Finally, the island comes into sight, the music gathers force and direction, and at last we hear the Dies Irae, the Gregorian chant from the Mass for the Dead—a motto of mortality that recurs often in Rachmaninov’s music. Then suddenly the music is suffused with life—urgent, passionate, and joyous. (Here Rachmaninov departs from the painting, although Böcklin did in fact paint a complementary Isle of Life two years after his last Isle of the Dead canvas.) But the Dies Irae rings out, and the music is again clouded in shadows. The ending is mostly still, and we are left where we began, with the sound of ceaseless rowing.

An arrangement for 2 pianos sourced from my favourite treasure trove of classical music, with Zdeňka Kolářová and Martin Hrše of the Prague Piano Duo:

In honour of  Böcklin  and Rachmaninoff, as well as the historical origins of our modern interpretation of Halloween, I’ve written a few verses of my own:

Journey to The Isle of the Dead

Deep, melancholy chords escort me to the Isle of the Dead,

No wind to rustle the sombre shroud of Cypress leaves,

Oil on canvas for widow Maria; a window to her dreams.

The fatal shore beckons: come, come, your soul to reap.

Cross the silent, still surface, to peace or purgatory…

Within the high, pale rock, lies the secret of eternity,

Sea and sky blend and merge, in subtle, never-ending horizon,

Arrival assured: but no departure possible, from Death’s Island.

Rhythmic notes on the stave narrate a deathly story,

A final journey to the sea-bound realm beyond the living…

Corpses lay buried, side by side, forever to abide,

Within the endless cavern of souls; life doth hide.

Holy Eve before the rising; for death is conquered in heaven…